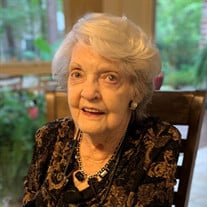 Her children arise and call her blessed. –Proverbs 31:28 Dremma, a true Proverbs 31 woman, entered the presence of her Lord and Savior Jesus Christ on April 13, 2021. She was born on August 26, 1935 in Dallas, Texas to James “Moody” and Ola Mae (Pilgram) Moore. Dremma attended Dallas schools and completed her studies at Adamson High School. Soon after, she began her career with Sears, Roebuck and Company in Dallas, Texas. In 1965, she married the love of her life, Glenn Ray, and they made their home in Dallas for several years, until moving to DeSoto, Texas in 1967. They raised their three daughters while living in DeSoto and were long time members of Hampton Road Baptist Church. Dremma was skillful in many ways and had an exceptional gift of serving others. She excelled at everything she did, receiving tributes and awards with Home Interiors and Gifts, and later in life with Avon Products, Inc. She and Glenn moved to Tyler, Texas in 2015. Dremma was preceded in death by her husband in 2018 and is survived by her three loving daughters and their husbands, Dremma Kay “D.K.” and Robert Haywood, Terri Gail and Joel Brown, and Glenda Gay “Gigi” and Brent Wadle. “Gran” leaves behind the grandchildren she adored, Michael, Jordan, Kelsey, Jacob and Caleb, and great-grandsons, Braiden and Luke. The family would like to extend a heartfelt thank you to the wonderful caregivers at Brookdale Tyler East Assisted Living and to the doctors, nurses and aids at Hospice of East Texas. The love, care and support that they provided was “heaven-sent.” A memorial service will take place at Grace Community Church Chapel in Tyler, Texas on Sunday, April 18, 2021 at 2:00pm with Rev. Doug Clark, Dr. David Rose and Pastor Adam Williams officiating. Visitation will follow immediately after the service at 3:00pm. If desired, the family asks that memorials be made to The Hospice of East Texas Foundation, www.hospiceofeasttexas.org.

The family of Dremma Fay Throckmorton created this Life Tributes page to make it easy to share your memories.

Her children arise and call her blessed. –Proverbs 31:28

Send flowers to the Throckmorton family.