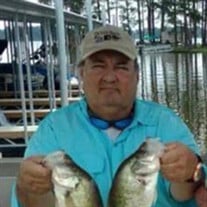 A family graveside service will be held for Leonard Dwain Mazingo, 64, of Tyler at Siloam Cemetery near Buffalo under the direction of Stewart Family Funeral Home. He was born December 23, 1957, in Palestine, Texas, to Clarence Preston and Robbie Mullenax Mazingo. He passed away suddenly Saturday, January 29, 2022, in Tyler. Mazingo was a member of Green Acres Baptist Church. He graduated from Robert E. Lee High School and Kilgore College. He has been employed at Brookshire Company for 44 years as a diesel mechanic. A family man to the core, he devoted most of his time to his sons and cherished grandchildren, his mother, and siblings. He threw in a bit of fishing and hunting at every opportunity. He took joy in quietly helping people in need. He could figure things out when there was an issue at hand. “Somebody said that it couldn’t be done, But he would reply that maybe it couldn’t But wouldn’t say so until he tried. And the first thing we knew he’d begun it. That couldn’t be done and he did it.” Dwain was preceded in death by his father, Clarence Mazingo, and his brother, James Mazingo. He is survived by his loving family including his mother, Robbie Mazingo; sons, Jeremy and wife Amy, Jason and wife Stephanie; sisters, Barbara McClain and husband Phil and Leona Mayfield of Mixon; brother, Clint Preston Mazingo and wife Sheryl; grandchildren, Madison Wagner and husband Jared, Morgyn and Molly Fulgham, Harper, Jed, Isabella, Devyn, and Juliana Mazingo; former wife and friend, Patricia Mazingo; numerous nieces and nephews. The family will receive visitors Wednesday, February 2 from 6-8 p.m. at Stewart Family Funeral Home, 7525 Old Jacksonville Highway in Tyler. If desired, memorials may be made to In Touch Ministries, P.O. Box 7900, Atlanta, GA 30357 (www.intouch.org) or St. Jude’s Children’s Hospital, 501 St. Jude Place, Memphis, TN 38105 (www.stjude.org).

A family graveside service will be held for Leonard Dwain Mazingo, 64, of Tyler at Siloam Cemetery near Buffalo under the direction of Stewart Family Funeral Home. He was born December 23, 1957, in Palestine, Texas, to Clarence Preston and... View Obituary & Service Information

The family of Dwain Mazingo created this Life Tributes page to make it easy to share your memories.

A family graveside service will be held for Leonard Dwain Mazingo,...

Send flowers to the Mazingo family.