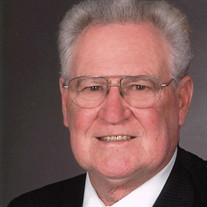 Edward “Ed” Merrill Evans was born on October 23, 1941, in Minden, LA to the late Ivan Mumford Evans and Audrey Dimple Edwards Evans. He graduated from Elysian Fields High School in 1960 and liked to tell people that he and his wife, Carolyn, were in the top ten in their class (there were 10 graduates)! He served his country in the U.S. Air Force during the Vietnam war. After the service, he returned to Panola College and then graduated from East Texas State University in 1971. Ed was a land survey party chief for Wisenbaker, Fix & Associates which became Kindle & Stone Engineering; he retired in 2004 after 30 years of employment. Ed is survived by his wife of 55 years, Carolyn Franklin Evans, and their 2 sons: Terry and his wife Tammy Evans and Scott and his wife Amaliz Evans, all of Whitehouse; as well as 5 grandchildren and 4 great-grandchildren: Stephanie and her husband Tim Priest (Gracie, Zachary, Henry), Ashley and her husband Jeremy Priest, Jamie Evans (Bella) and Josie and Brody Evans. The entire family had a fun cruise to Key West and the Bahamas in October, 2019. Ed was the big brother to 2 sisters and a brother: Martha and her husband Buddy Ray of Athens, Myrna Kornegay of Umatilla, Oregon, and Kirby and his wife Marva Evans of Marshall. He is also survived by his mother-in-law, Frances Franklin, and brother-in-law, Bob Franklin, both of Whitehouse. His extended family is too large to list, however, 'Eddie Merle' always looked forward to the annual Evans Re-union on the first Saturday in June; family was very important to him. Ed loved the outdoors; he enjoyed hunting, fishing, trapping, camping and traveling; Eddie & Carolyn spent the summer of 1993 RV-ing in Alaska (one of 4 trips there) and he has driven in all 50 states. He coached his boys during T-ball and soccer, was a Boy Scout leader and attended lots of school activities for his sons and grandchildren. He has been a faithful member of First Baptist Church of Whitehouse since joining in 1976 and has served on several committees. With the help of the University of Arkansas Medical Center's Myeloma Institute in Little Rock, AR, Texas Oncology in Tyler, and the VA medical services, Ed challenged multiple myeloma for 18 years. He fought with steadfast faith, courage and grace; he won the battle on June 22, 2020. He was a caring husband, father, PawPaw and friend and will be dearly missed. A memorial service for Ed will be held at 2:00 p.m. Thursday, June 25, 2020 at First Baptist Church in Whitehouse with Rev. Harold Davis officiating. Visitation is scheduled one hour prior to the service at the church. In lieu of flowers, memorials may be sent to the International Myeloma Foundation, 12650 Riverside Drive, Suite 206, North Hollywood, CA 91607 or First Baptist Church Whitehouse Building Fund, 801 East Main Street, Whitehouse, TX 75791. Isaiah 40:31 “They that wait upon the Lord shall renew their strength; they shall mount up with wings as eagles; they shall run, and not be weary; and they shall walk, and not faint.”

Edward &#8220;Ed&#8221; Merrill Evans was born on October 23, 1941, in Minden, LA to the late Ivan Mumford Evans and Audrey Dimple Edwards Evans. He graduated from Elysian Fields High School in 1960 and liked to tell people that he and his wife,... View Obituary & Service Information

The family of Edward Merrill Evans created this Life Tributes page to make it easy to share your memories.

Send flowers to the Evans family.