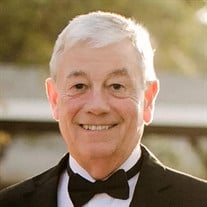 Edward Leon Parker passed away Wednesday, February 26, 2020 in Tyler, TX. Eddie, as he was affectionately known, was born on June 4, 1952 in Mexia, TX to Richard Leon Parker and Bobby Louise Parker. He spent the majority of his childhood in Tyler where he graduated from John Tyler High School in 1970. He pursued a number of careers, most of which reflected his strong drive to help others. He enlisted in the United States Marine Corps on his 18th birthday, serving four years, where he received multiple honors and promotions. In 1978, he joined the City of Tyler Police Department where he served as a patrolman, vice and narcotics officer, and detective. He left the force to finish his education and became a lawyer, often reducing his wages to help a person in need. Eddie was all heart. He was a kind and generous man, and was known to be the life of the party. We will miss his jokes, the laughter he brought to everyone he met, and his uncanny ability to be both blunt and kind. He was preceded in death by his parents and sister, Ann Pessoney. He is survived by his two daughters, Kimberly Menge and husband Clark, Christin Shilling and husband Derek; sister, Sandra Goodman; nephew, Matthew Goodman and wife Jayne; three precious grandsons, who knew him as "Pepaw", William & Parker Menge and Sullivan Shilling; and two beloved nieces, Elle & Gwen Goodman who called him "Great Grand Poopow.” He is also survived by wonderful friends and extended family. Services will be held on Monday, March 2, 2020 at 2:00 p.m. at Stewart Family Funeral Home with Pastor Jeff Gage officiating, preceded by a visitation at the same location on Sunday, March 1, 2020 from 5:00 p.m. – 7:00 p.m. A private burial will be held at the Dallas-Fort Worth National Cemetery with military honors. To honor his memory, in lieu of flowers, the family suggests that remembrances be made in his name to the Wounded Warrior Project, P.O. Box 758516, Topeka, KS 66675-8516.

Edward Leon Parker passed away Wednesday, February 26, 2020 in Tyler, TX. Eddie, as he was affectionately known, was born on June 4, 1952 in Mexia, TX to Richard Leon Parker and Bobby Louise Parker. He spent the majority of his childhood in... View Obituary & Service Information

The family of Edward Leon Parker created this Life Tributes page to make it easy to share your memories.

Send flowers to the Parker family.