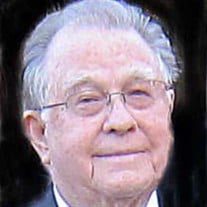 Graveside funeral services for Edwin Lee Lewis, Jr. of Tyler, Texas will be held on Sunday, February 28, 2021, at 2 PM at Rose Hill Cemetery (southeast corner) in Tyler, TX with Rev. John Glenn officiating. Burial will be under the direction of Stewart Family Funeral Home. Rev. Lewis passed away Friday, February 12, 2021 in Lindale from long term effects of the Covid-19 virus. He was born May 30, 1925 in Sulphur, Louisiana to Edwin Lee Lewis, Sr. and Lucy Belle Lyons Lewis. Rev. Lewis grew up in south Louisiana and Texas during the oil and sulfur boom, and the Great Depression. He served in the US Navy from 1943 to 1946, and was stationed on Guam when World War II ended. He graduated from Howard Payne University in Brownwood, TX and also Southwestern Baptist Theological Seminary in Fort Worth, TX. After graduating from the seminary, he began a lifelong journey of pastoring churches in Alba, Franklin, Flint, Big Sandy, County Line (Teaselville), and Golden. When he left us, Edwin was a member of Golden Baptist Church. Edwin was preceded in death by his wife of 63 years, Lydia Anne Lewis. He is survived by his son, Phil Lewis and wife, Denita of Spring Branch, TX and son, Barry Lewis and wife, Melinda from Irving, TX. He is also survived by five grandchildren, Shane Lewis and wife, Kari, Barrett Lewis and wife, Kathryn, Bethany Merriman and husband, Ryan, Lane Lewis and wife, Brittany and Jace Lewis. Great-grandchildren include Avery Lewis, Cade Lewis, Judson Lewis, Asher Lewis and Silas Merriman. He is also survived by sister-in-law, Connie Lewis of San Antonio; nephew, Randy Pennington of Mesquite; niece, Marilyn Gifford of Allen; and niece, Tammy Grubaugh of San Antonio. Also survived by 9 nieces and 5 nephews from Anne's family in Tennesee. Special thanks to nieces, Phyllis Luttrell, Becky Babb, and Patricia Branham, and nephew, Rickey Stockton for staying in close contact with Anne and Edwin for many years. Also survived by his special friend, Minion Bean, her daughter, Sheila and husband, Charlie Padon of Lindale. Special thanks to the many staff members at Wesley House in Lindale who worked tirelessly to care for him in so many ways. The family invites you to leave a message or memory at https://www.stewartfamilyfuneral.com/obituaries/Edwin-Lewis-8/. If desired, memorials may be made to the Golden Baptist Church, 543 Co Rd 2940, Alba, TX 75410.

Graveside funeral services for Edwin Lee Lewis, Jr. of Tyler, Texas will be held on Sunday, February 28, 2021, at 2 PM at Rose Hill Cemetery (southeast corner) in Tyler, TX with Rev. John Glenn officiating. Burial will be under the direction... View Obituary & Service Information

The family of Edwin L. Lewis, Jr. created this Life Tributes page to make it easy to share your memories.

Send flowers to the Lewis, family.