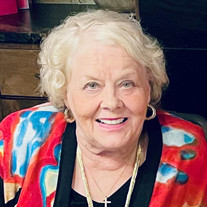 Not sure what to send?

Elizabeth Ann “Bitsy” Wright, born April 24, 1946 in Rochester, NY, left for heaven on June 16, 2022 after 76 years on earth. She spent her first years in Post, Texas where her parents Joy and David Schultz owned a photography studio. In 1950 they moved to Dallas where Bitsy’s first job was a model for J.C. Penney’s buyer catalogue, which began in elementary school and continued through high school. She won numerous beauty contests, including Miss Addison in the 1960s. Bitsy graduated from Thomas Jefferson High School (Dallas) in 1964, where her favorite extracurricular activity was membership in the Reb Belles Drill Team. She attended the Dallas Art Institute for two years, then transferred to TCU, where she majored in Art with an emphasis in fashion design. She eventually began work with a Dallas art museum, then continued as a designer for fashion manufacturers in Dallas. There she met her former husband, Allan Nelson, and they married in 1978. Because they were not allowed to work for the same firm as a married couple, she entered the field of retail store management supervising fashion departments. They soon moved to Tyler where they purchased the Broadway Junior Senior Shop. After their divorce in 1980s, she returned to retail management. Bitsy also returned to college, completing her BA degree in Sociology from The University of Texas at Tyler. She soon began her own pottery studio at home, where she developed beautiful techniques producing southwestern art. She served on the U.T. Tyler Alumni Council and The College of Arts and Sciences Development Council. She had hoped to combine Art with her sociology degree to help uplift children to more fully thrive through difficult circumstances. She joined St. Francis Episcopal Church, Tyler, where she volunteered for numerous activities, including designing and creating costumes for Christmas and summer programs. She also served as member of Daughters of the King and directed and sponsored numerous summer programs for the Youth. Bitsy left the workforce to care for her ailing mother, Joy Wright, and eventually for her adoptive stepfather, Harrold Eugene “Gene” Wright. She also began to work with Gene in his oil and gas business. Bitsy remained a caretaker and office manager until his death. She continued her volunteer work at St. Francis, serving in many activities and membership until she fell ill with brain cancer in June 2021. Bitsy’s life was full of adventure including scuba diving, travel, pottery, sewing, fashion design, retail management, rental properties, and the oil and gas business. Hardly a week would pass without someone recognizing Bitsy as having sold them a dress for wedding, prom, or the Texas Rose Festival. She will be remembered for her quiet, kind, cooperative, and fun spirit. She never sought recognition for her life or her giving. All in all, Bitsy gave her commitment to her church. She used her gifts and talents through art. But her true love and passion was for her dogs. They were her children and she was never without a rescued pup. She is survived by her older sister, Marianne S. Arnold, of Colorado Springs, Colorado, and her dearest friend and caregiver, Derrith Bondurant. She leaves behind many friends, including her favorite “Gals Gathering Group of Tyler,” her church family, and caring neighbors at The Stretford at the Cascades, where she lived happily with her doggie Rudy. Her sister Marianne and friends are especially grateful for the comfort and care from Father Mitch Tollett of St. Francis Church, her special home health caregivers Darlene, Philenia, Stephanie, Pam, Thelma, and Mariland. A special thanks to Hospice East Texas nurses Emily and Selene. Bitsy developed a wonderful bond with Noah’s Critters representative Cynthia who walked Rudy daily. Ultimate gratitude is given to Bitsy’s doctors Dr. Arielle Lee, Dr. Thomas Grahm, and Dr. Natalie Johnson. Bitsy leaves behind her legacy gifts to benefit numerous organizations in East Texas and asks any memorial remembrances be made to St. Francis Episcopal Church, Paws for a Cause, Nicholas Pet Haven, or Hospice East Texas. Bitsy was a survivor who weathered life’s peaks and valleys and has finally found peace and complete healing in her eternal home. A memorial service will be held on Saturday, July 16, 10 am at St. Francis Episcopal Church, 3232 Jan Ave., Tyler. “For God so loved the world that he gave His one and only Son, Jesus, that whoever believes in Him will not cease to exist, but have eternal life.” John 3:16.

The family of Elizabeth "Bitsy" Ann Wright created this Life Tributes page to make it easy to share your memories.