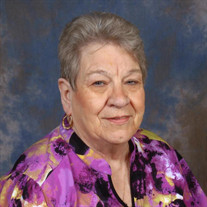 Services for Elizabeth “Libby” Ann Hayes Warren, 78, of Bullard, will be held on Wednesday, March 16, 2022 at 2:00 p.m. at Stewart Family Funeral Home in Tyler. Interment will be Thursday, March 17, 2022 at Mt. Rose Cemetery in Livingston under the direction of Stewart Family Funeral Home. Mrs. Warren passed away Tuesday, March 8, 2022 in Tyler. She was born in DeWitt, Arkansas to Elton P. Hayes and Irene Timmerier Hayes. Libby was that face you saw when you sat down at the dinner booth for a cup of coffee sometimes, if not most of the time. She was the one flipping eggs in the back. She never met a stranger. She was a friend to everyone. That person you felt like you could tell all your worries too. After she hung up her apron in the café, she traded it for the one at home. Libby was a sister to nine. Most of all, Libby was a mother to five, Grandmother to nine and a proud Great-Grandma to seven. It tickled her because the last great-grandchild she would have the chance to see born, changed her name at the end from Grandma to Gammie. It just lit her heart to hear Damien run through the door hollering Gammie. She was preceded in death by her brothers, Paul Hays, Charles Hays and Leonard Hayes and sisters, Eunice Brigham, Elsie Shafer, Opal Dawson, Lu Fay Fisher, and Mary Hayes; and son, William Edward Warren. She is survived by her husband of 36 years, James Warren and one sibling, John Hays and his fiancé, Lavenia Starr; daughters, Sherry Fields, Peggy Moore and sons, Presley Swagerty and wife, Jennie; William Fields and wife, Cynthia; 9 grandchildren, Kesha Thorne and husband, Robbie; Sarah Beth Swagger, Amanda Humphries and husband Eric; 4 grandsons, JJ Lies, Jordan Swagger, James Fields, William Fields and wife, Carolyn; great-granddaughters, Ariel Lies, Kendyce Fields; great-grandsons, Damien Lies, Austin Humphries. As well as several nieces and nephews. There was a big family. Pallbearers will be Robbie Thoprne, JJ Lies, and James Fields.

The family of Elizabeth "Libby" Warren created this Life Tributes page to make it easy to share your memories.

Send flowers to the Warren family.