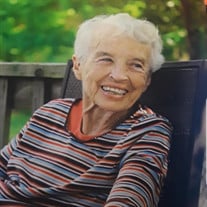 Services for Emma Lou Prater, 91, of Whitehouse, formerly of Tyler, will be held on Tuesday, December 29, 2020 at 2:00 p.m. in the Stewart Family Funeral Home Chapel with Dr. Blair Blackburn and Tom Crawford officiating. Burial will follow in Cathedral in the Pines Cemetery in Tyler under the direction of Stewart Family Funeral Home. Mrs. Prater passed away Wednesday, December 23, 2020 in Whitehouse. She was born July 22, 1929 in Edom to the late Roy Andrew Wyatt and Alice Steele Wyatt. Emma Lou was a member of Westwood Baptist Church, formerly Queen Street Baptist where she taught a College and Career Sunday School class. She graduated from Tyler High School in 1945 at the age of 15 and attended TJC in 1945-46. She married Kenneth Prater on December 5,1947 and they were married 65 years until his death in 2013. Emma Lou worked for the General Electric Company from 1957 to 1964 in advertising and sales promotion. She fondly remembers getting to meet Ronald Reagan during this time. She began her career at Tyler Junior College in 1964 and worked as an accountant in the business office. She also began working with the cheerleaders during this time and she and her family never missed a TJC football or basketball game. She loved having the TJC athletes over for Sunday evening suppers, since the cafeteria was closed at that time. In 1968, Emma Lou went back to school to get her degree while working full time. She got her bachelor’s degree in 1971 and her master’s in 1983 from East Texas State University in Commerce. In 1978, Kenneth’s job took them away from Tyler for a couple of years, but when they returned, Emma Lou went back to work at TJC, this time as the Student Activities director. In this capacity, she worked with all of the student organizations, but most closely with the Student Senate. She also became the full-time sponsor of the cheerleaders. She and the cheerleaders would hold cheerleader camps in the area and even took a group to Germany to hold a camp for some of the schools there. These were the years that were the most precious to her as she had many memories of this time in her life. She was awarded the Emma Lou Prater Presidential Scholarship in 1989 and retired the same year. After retirement, Emma Lou still worked closely with the TJC Alumni Association, serving as president and member of the board of directors. Also, she and Kenneth enjoyed playing golf and traveling with their golfing group. She also loved hosting parties for her friends and family, reading and working in her yard. Emma Lou was preceded in death by her husband, Kenneth Prater; her brother, Royce Wyatt, and her sister-in-law, Fern Prater Timmons. She is survived by her loving family including daughters, Sherry Patterson of Longview, Tx. and Sandy Adams and husband, Rick of Whitehouse, Tx.; grandchildren, Jason Adams and wife, Crystal of Fairfield, Tx., Rebecca Adams Rodriguez and husband, Kris of Whitehouse, Tx., Jennifer Patterson Lowe and partner, Leslie Deucker of Tyler, Tx., and Julie Patterson Odom and husband, Jason of Wylie, Tx.; great-grandchildren, Kolby Adams, Regan Rodriguez, Alex Rodriguez, Cole Odom and Caden Odom; sisters-in-law, Mary Prater Jones of Tyler, Tx. and Rebecca Wyatt of Odessa, Tx.; several nieces and nephews, as well as countless TJC students who have been impacted by her life over the years. Pallbearers will be Jason Adams, Kolby Adams, Kris Rodriguez, Regan Rodriguez, Alex Rodriguez and Pat Snow. Honorary pallbearers will be former TJC cheerleaders. Visitation is scheduled from 5:00 - 8:00 p.m. on Monday, December 28, 2020 at Stewart Family Funeral Home, 7525 Old Jacksonville Highway, in Tyler. If desired, memorials may be made to either of these Tyler Junior College Scholarships: The Emma Lou Prater Presidential Scholarship or The Kenneth Prater Cheerleader Scholarship or to the charity of your choosing.

Services for Emma Lou Prater, 91, of Whitehouse, formerly of Tyler, will be held on Tuesday, December 29, 2020 at 2:00 p.m. in the Stewart Family Funeral Home Chapel with Dr. Blair Blackburn and Tom Crawford officiating. Burial will follow... View Obituary & Service Information

The family of Emma Lou Prater created this Life Tributes page to make it easy to share your memories.

Services for Emma Lou Prater, 91, of Whitehouse, formerly of...

Send flowers to the Prater family.