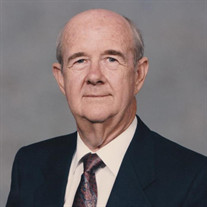 Emory Douglas Fielding, devoted Christian, loving husband and proud grandfather passed away peacefully on Monday, April 27, 2020. Emory was born May 10, 1928 to Albert Aires and Bonnie Kate Brazzil Fielding in Marshall. He was doted on by his four older sisters. After graduating from Tyler High School, Emory studied business until he was drafted into the U.S. Army in 1950. He proudly served his country during the Korean War, being stationed in both Korea and Japan. After returning from the war, he resumed his studies and went on to work for Arthur Squires and Tyler Pipe before establishing his own businesses. Emory was a long-time member of Green Acres Baptist Church and the Sonshine Sunday School Class. He was a very active volunteer for many years for Meals on Wheels, even being honored with the Volunteer of the Year Award, along with his wife. Emory was an avid outdoorsman enjoying fishing, boating and being out in nature. He was extremely talented with wood working, making many beautiful pieces of furniture for his family. In later years, Emory developed a talent for the lapidary arts and cut gorgeous gemstones that became the treasured jewelry pieces of his wife and daughters. His favorite activity, however, was spending time with his beloved wife, Gerry, his daughters and grandchildren. Emory was predeceased by his parents; and his sisters, Lorene Cone, Marie Neel, Catherine Morgan and Velma Cole. He is survived by his loving wife of 67 years, Gerry; daughters, Leslie and Gary Kotzur of Austin and Janis and Michael Holian of Chandler, AZ; grandchildren, Michael (Bam) Fielding Holian and MacKenzie Reeve Holian; and his nieces and nephews, Jane Clark, Tim Neel, Kathy Matsis, Greg Morgan, Ronald Cole and Gerald Cole. In addition, Emory is survived by his family in Germany, Rolf and Erika Hoehle, their children Joerg, Annegret and Hartmut and their families. The family will have a private graveside service at Cathedral in the Pines Cemetery under the direction of Stewart Family Funeral Home. If desired, memorials may be made to Meals on Wheels East Texas at www.mealsonwheelsetx.org.

Emory Douglas Fielding, devoted Christian, loving husband and proud grandfather passed away peacefully on Monday, April 27, 2020. Emory was born May 10, 1928 to Albert Aires and Bonnie Kate Brazzil Fielding in Marshall. He was doted on by... View Obituary & Service Information

The family of Emory Douglas Fielding created this Life Tributes page to make it easy to share your memories.

Send flowers to the Fielding family.