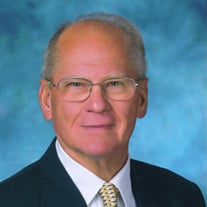 Ernest Maxey Abernathy, a longtime resident of Tyler, died January 25, 2022 in Dallas, Texas. He was born in Atlanta, Georgia on August 8, 1938. He was preceded in death by his parents, Ernest Hubert and Annie Abernathy, as well as his three sisters, Opal, Della Mae and Kathryn. He is survived by his wife of 58 years, Carole Jean of Dallas; his daughter, Jean Ann and her husband, David Vickers of Leawood, Kansas; his son, Glenn Abernathy and his wife, Leslie of Longmont, Colorado; and his daughter, Paula, and her husband, Jason Woodbury of Dallas. He is also survived by his 5 grandchildren and 1 great-grandchild: Emma and her husband, Adam Palmer of Eloy, Arizona; Charlotte Vickers of Leawood, Kansas; and Garrett Woodbury; Sher Moo Ku and Kathryn Woodbury, all of Dallas, Texas; and great-grandson, Logan Palmer of Eloy, Arizona. He is also survived by his brother, Paul Abernathy and his wife, Jewell of Hartwell, Georgia. In addition, he is survived by numerous nieces and nephews who were all very dear to him. He believed family to be the most important thing in his life. He attended public school in Atlanta and graduated from Roosevelt High School in 1956. He attended the Georgia Institute of Technology on the Cooperative Program and received his Bachelor of Chemical Engineering in 1961. While participating in the Cooperative Program, he worked with Mobil Oil in Dallas. After graduating from Georgia Tech, he worked for the high-explosive lab at Los Alamos, New Mexico before switching gears and attending Baylor University College of Medicine in Houston, Texas. He graduated from Baylor University College of Medicine in 1966 with his MD and a MS in Physiology. After graduation, he completed his internship at John Peter Smith Hospital in Fort Worth, Texas. His first practice experience was in the US Army Medical Corps serving from 1967-1971 ending with the rank of Major. His first assignment was at Letterman General Hospital in San Francisco for a short course in radiology. He then served as a radiologist at the 14th Field Hospital in Bad Kreuznach, Germany and subsequently at the US Army Hospital in Livorno, Italy. Following completion of his military service, he served a diagnostic radiology residency at North Carolina Memorial Hospital in Chapel Hill, North Carolina from 1971-1974 serving as Chief Resident the last year. After completion of his training in North Carolina, he joined Tyler Radiology Associates and worked with this group until his retirement in 2005. Maxey belonged to the Smith County Medical Society, Texas Medical Association, American Medical Association, Radiological Society of North America and the American College of Radiology. The American Board of Radiology certified him in 1974. He was named a Fellow of the American College of Radiology in 1994. For several years he taught physics to students of x-ray technology at Tyler Junior College. He was very active in and held many positions within the Texas Radiology Society, serving as President in 2001-2002. In recognition of his contributions to the Society, the TRS awarded him their Gold Medal in 2008. After retirement he worked with the Bethesda Health Clinic and was named a Dr. Luke in 2006. He has been a member of First Baptist Church of Tyler since 1975 and served as a deacon. Beyond spending time with family, Maxey enjoyed traveling to France, Greece, Turkey, Croatia, Tibet, China as well as to his cabin on the Toccoa River in the mountains of North Georgia. His hobbies were raising Tennessee Walking Horses, doing woodwork and hiking and canoeing in the mountains of northeast Georgia. There will be a memorial service at First Baptist Church of Tyler, Texas on February 12, 2022 at 1:00 p.m. in the main sanctuary preceded by a family graveside service at Rose Hill Cemetery both officiated by Rev. David Mann, chaplain at Ventana by Buckner of Dallas under the direction of Stewart Family Funeral Home. The family requests that all attendees wear masks. Pallbearers will be Brian Franck, David Abernathy, Geoff Moore, David Vickers, Jason Woodbury, Ron Pinkenberg, Michael Simpson, and Bill Wylie. Honorary Pallbearers are The Adult 3 Men’s Class (formerly known as John Minton’s Class) from First Baptist Church of Tyler. Carole Jean would also like to thank the Becomers Class at First Baptist Church for all the support they have provided. The family suggests that memorials, if desired, be made to Bethesda Clinic of Tyler (www.bethesdaclinic.org) 409 W. Ferguson St., Tyler, TX 75702; The Alzheimer’s Alliance of Smith County (www.alzalliance.org) 211 Winchester Dr., Tyler, TX 75701; or the charity of your choice.

Ernest Maxey Abernathy, a longtime resident of Tyler, died January 25, 2022 in Dallas, Texas. He was born in Atlanta, Georgia on August 8, 1938. He was preceded in death by his parents, Ernest Hubert and Annie Abernathy, as well as his three... View Obituary & Service Information

The family of Dr. Ernest "Maxey" Abernathy created this Life Tributes page to make it easy to share your memories.

Send flowers to the Abernathy family.