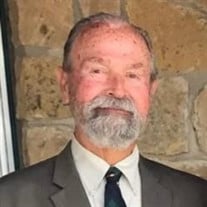 Ernest Beam Gordon (“Ernie”), 82, passed away Friday, April 23, 2021 in Flint, Texas. He was born February 12, 1939 in Long Beach, California to James Gordon and Margery Monfelt Gordon. Ernie graduated from Long Beach Polytechnic High School in 1956. He went on to gain a B.A. in Biology with a minor in Education and Physical Science from Long Beach State College in 1961. Ernie served in the U.S. Army from 1961-1964 and functioned as a communications intercept specialist for the Army Security Agency. He worked at E.R. Squibb and Sons, Montgomery Ward, and The Treasury (later called J.C. Penney) before he settled into a 23-year career with The Goodyear Tire and Rubber Company. First and foremost, Ernie was a man of deep faith and spent his time studying God’s word and sharing it anytime an opportunity presented itself. Ernie was a longtime member of West Erwin Church of Christ where he served often and enjoyed many friendships and fellowship there. He was an avid admirer of God’s creation. He enjoyed having a garden and sharing the fruits of his labor. He loved exploring the Hawaiian Islands, playing golf a couple times a week and traveling to see his family, especially his grandkids. It must also be said how much he adored his canine companion, Oliver. Ernie is survived by his wife, Sharon of almost 50 years; brother, Jim Gordon; sister, Terrie Lanier; daughters, Kimberlee Lawless, Kasey Corcoran and April Spicer; 3 sons-in-law, John Lawless, Mike Corcoran and Brian Spicer; and 7 grandchildren, Jake Lawless, Mackensee Lawless, Connor Edwards, Payton Edwards, Noah Spicer, Wesley Spicer and Macy Spicer. Memorial services will be held on Saturday, May 1, 2021 at 2:00 PM at West Erwin Church of Christ, 420 W. Erwin St., Tyler, Texas 75702.

The family of Ernest "Ernie" Beam Gordon created this Life Tributes page to make it easy to share your memories.

Send flowers to the Gordon family.