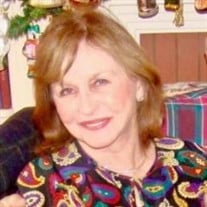 Etheldra Adams “Punkin” Turner passed away peacefully at her home surrounded by family on December 26, 2020. She was born June 7, 1932, in Shreveport, La. to the late George Samuel Adams and Margaret DeLoach Adams of Henderson, Texas. She grew up in Turnertown, Texas and attended Gaston Schools where she was a Gaston beauty and Drum Major for the band. Following graduation from Gaston High School, she attended Stephen F. Austin where she was a majorette for the Lumberjack Band and a Stone Fort Beauty. Punkin was gifted with a beautiful voice and while at Stephen F. Austin, Gussey Nell Davis and Van Cliburn traveled to her home in Turnertown, Texas and recruited her to be a member of the Kilgore College Rangerettes and sing when traveling with the group. She accepted the invitation and transferred to Kilgore College and traveled with the Rangerettes as a performer and an accomplished singer. She sang at the opening of the Shamrock Hotel in Houston and also traveled to New York with the Rangerettes and performed on the Ed Sullivan Show. She was the model for the original Rangerette Doll. She completed her junior and senior years at the University of Texas where she was a member of the Delta Gamma Sorority and a University of Texas Bluebonnet Beauty for two years. While at the University, she met the love of her life, Cotton Turner, after he served in the U.S. Army in Counter Intelligence and while he was attending the University of Texas Law School. They married in 1954 and spent the first year of marriage in Yellowstone Park, Wyoming where Cotton was a Yellowstone Park Ranger. Upon returning and receiving his Doctor of Jurisprudence Degree from University of Texas Law School, they moved to Tyler, Texas in 1956. In the 1960 campaign for John Tower senate race of Texas, Punkin was a member of the Tower Belles, campaigning around the state for John Tower. In 1964 - 1988 she was a member of the Bush Belles, wearing their trademark red-white-and blue scarves and accompanied George and Barbara Bush in their campaign efforts throughout the state of Texas. Punkin loved her Tyler community and friends. She was a member of Marvin United Methodist Church as well as an active member of the Daughters of the American Revolution with dedicated service of 50 years. Punkin enjoyed being a member of the Junior League of Tyler as well as member of the Women’s Symphony League and the Tyler Art Museum. She was a charter member and past president of the Marion Wilcox Junior Garden Club, as well as charter member of the Friday Night Dinner Club, and member of the Deck Club where she served as President. Punkin enjoyed playing bridge, mahjong, traveling with friends, and entertaining. Punkin shared a love for the University of Texas at Tyler with her husband, Cotton, where they established several endowed scholarships including the Margaret DeLoach Adams Memorial Scholarship and the Cotton and Punkin Turner Scholarship. In addition, they made a gift to fund the Cotton and Punkin Executive Conference Room which is part of the Engineering dean's administrative suite in the College of Engineering and were long time supporters of the Cowan Center. Punkin is preceded in death by her parents and her husband of 63 years, William Franklin “Cotton” Turner. She is survived by son, Dr. William Franklin Turner, Jr. and wife Jody of Tyler; daughter, Carol Turner Woolley and husband Buddy of Longview; and son, John Samuel Turner of Galveston; grandchildren, William Turner 111 of Irving, Chloe Turner of Tyler, Hudson Johnson and wife Bessie of Longview, Lauren Brookshire and husband Wood of Dallas, Rachel Turner, Cotton Turner, Margaret Turner, and Sam Turner all of Houston; and great-grandchildren, Kennedy Turner of Houston and Virginia Ann Brookshire of Dallas. Punkin was a devoted and loving wife, mother, and grandmother who enjoyed spending time with her family. She will be remembered by everyone who knew her as a beautiful and true lady of grace, integrity and style who showed kindness to all. She along with her husband, Cotton, especially enjoyed spending time together at their ranch in Robertson County. Theirs was a true love story. She will be missed greatly by her family. Many thanks from the family, to her caregivers Carolyn, Diane, Cora, Angie, Esther and Sophie for their love and devotion as well as the Hospice providers. A private family burial service will be held at Rose Hill Cemetery with Rev. Gerry Giles officiating under the direction of Stewart Family Funeral Home. In lieu of flowers, memorials may be made to Marvin United Methodist Church, 300 W. Erwin St., Tyler, Texas 75702 and University of Texas in Tyler, 3900 University Blvd., Tyler, Texas 75799 or the charity of your choice.

Etheldra Adams &#8220;Punkin&#8221; Turner passed away peacefully at her home surrounded by family on December 26, 2020. She was born June 7, 1932, in Shreveport, La. to the late George Samuel Adams and Margaret DeLoach Adams of Henderson, Texas. She... View Obituary & Service Information

The family of Etheldra Adams "Punkin" Turner created this Life Tributes page to make it easy to share your memories.

Etheldra Adams “Punkin” Turner passed away peacefully at her...

Send flowers to the Turner family.