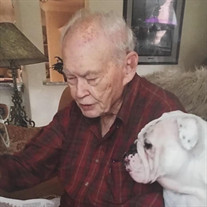 Graveside services for Everett Thurman Taylor Jr., 96, of Tyler, will be held on Wednesday, March 2, 2022 at 2 PM at Cathedral in the Pines Cemetery with Dr. Doug Baker officiating. Stewart Family Funeral Home is in charge of arrangements. Mr. Taylor passed away February 27, 2022, in a Tyler hospital. Born on a farm near Itasca, TX on July 8, 1925, Mr. Taylor was the son of Everett Thurman Taylor, Sr. and Eunice Easter Taylor. He entered the U.S. Army during World War II, taking infantry training at Camp Roberts and Fort Ord, then spending 13 months in the occupation of Korea after the Japanese surrender. He achieved the rank of Technical Sergeant. Upon leaving the Army, he attended Baylor University, graduating in 1950. While there, he was editor of the Baylor Lariat, the school paper, his senior year. He was an avid lifelong supporter of Baylor University and active member of the Baylor Bear Foundation and the Baylor 1845 Club. After graduation, he worked at the Eastland Daily Telegram as a one-person news staff. A year later, he moved to Tyler to accept a job at T. B. Butler Publishing Co. as a reporter and sportswriter. He would stay there for 57 years, serving the Tyler papers as managing editor, executive editor, and editor-in-chief. For 30 of those years Mr. Taylor wrote a page one Sunday column called “Huntin ‘n Peckin”. For the next 25 years he penned “Taylor’s Yarns.” He was the primary editorial writer for about 35 years until his retirement. Mr. Taylor served as president of the Texas Associated Press Managing Editors Association in 1976. His awards included the Texas Professional Educators Texas Freedom Award in 1977, and the Smith County Bar Association Law Day USA Liberty Bell Award in 1981. He was especially proud of the 1985 Communications Award presented by the Public Relations Advisory Committee of the Baptist General Convention of Texas. His numerous other writing and editing awards included a first place for editorial writing by the Texas United Press Editors’ Association in 1979. He also taught a journalism class at Tyler Junior College. Mr. Taylor and his first wife, Jimmie Lee Clanton Taylor, were married 62 years and had four children. They extensively traveled the country and the world, with many of their trips providing material for Sunday travel section feature stories. They were members of First Baptist Church. He met his second wife, Ann Taylor, at TASCA and they married in April 2013. They were members of Marvin United Methodist Church. Together they enjoyed traveling, attending Baylor football and basketball games, cultural events, and TASCA activities. Preceding him in death were his parents, his wife, Jimmie Taylor, his brother, Weldon Taylor, his daughter, Mary Jane Getz, and great-granddaughter, Kennedy Grace Cooper. He is survived by his wife, Ann Taylor of Tyler; brother, J.B. Taylor (Sylvia) of Fort Worth; daughter, Nancy Cooper (Cary) of Texas City; son, David Taylor (Kari) of Tyler; son, Tom Taylor of Leander; daughter-in-law, Betty Taylor of Leander; 11 grandchildren and 12 great-grandchildren. The family would like to offer its heartfelt thanks to the comfort care nurses and staff of 6th floor Owens Heart Hospital for the exceptional care they provided Mr. Taylor.

Graveside services for Everett Thurman Taylor Jr., 96, of Tyler, will be held on Wednesday, March 2, 2022 at 2 PM at Cathedral in the Pines Cemetery with Dr. Doug Baker officiating. Stewart Family Funeral Home is in charge of arrangements.... View Obituary & Service Information

The family of Everett Thurman Taylor, Jr. created this Life Tributes page to make it easy to share your memories.

Send flowers to the Taylor, family.