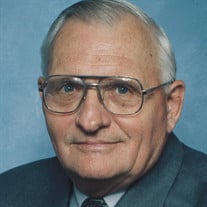 Services for Fendley Tucker, 87, of Tyler will be held on Friday, December 20, 2019 at 11:00 a.m. in the Stewart Family Funeral Home Chapel with Rev. Keith Brown and Rev. Robby Caldwell officiating. Burial is scheduled for 3:00 p.m. at Hopewell Cemetery in Gilmer under the direction of Stewart Family Funeral Home. Mr. Tucker passed away December 17, 2019 in Tyler. He was born August 5, 1932 in Big Sandy, Texas to Anderson Jackson Tucker and Axar Lee (Thompson) Tucker. Fendley was a 1950 graduate of Big Sandy High School, whose annual reunions he still eagerly anticipated. He, with his wife Lois, was a 67-year resident of Tyler, where he served as a long-time Treasurer, Deacon, board chair and member of Fair Park Baptist Church. Fendley and his wife Lois were married for 67 years this April. They met in 1951 while working for the Cotton Belt Railroad from which they retired after forty years in 1993. Fendley's time with Cotton Belt Railroad was interrupted only by his service in the United States Air Force, 1952 - 1954. Fendley served in many capacities for the Cotton Belt and its subsidiaries, as well as Trailways Bus Company. Fendley loved people and his exceptional work ethic showed how much. Fendley was preceded in death by his father, Anderson Jackson Tucker and his mother, Axar Thompson Tucker. He is survived by his loving family, including his wife, Lois Mills Tucker; his children, Anita Tucker Baxter and Edward Baxter of Rockwall, TX; his son, Andrew William Tucker and Gina Tucker of Chandler, TX; seven grandchildren and four great-granddaughters; a host of friends and, if you'd asked Fendley, his beloved dog, Sugar. Pallbearers will be Jase Bray, Jared Bray, Edward Baxter, Justin Garrett, Robert Ruby and Jason Henry. Visitation is scheduled from 10:00 to 11:00 a.m. on Friday, December 20, 2019 at Stewart Family Funeral Home, 7525 Old Jacksonville Highway in Tyler. If desired, memorials may be made to Fair Park Baptist Church 301 S. Bruck Ave., Tyler, TX 75702, or the Texas Baptist Children's Home, 615 Richmond Lane, Waxahachie, TX 75165.

Services for Fendley Tucker, 87, of Tyler will be held on Friday, December 20, 2019 at 11:00 a.m. in the Stewart Family Funeral Home Chapel with Rev. Keith Brown and Rev. Robby Caldwell officiating. Burial is scheduled for 3:00 p.m. at Hopewell... View Obituary & Service Information

The family of Fendley Tucker created this Life Tributes page to make it easy to share your memories.

Services for Fendley Tucker, 87, of Tyler will be held on Friday,...

Send flowers to the Tucker family.