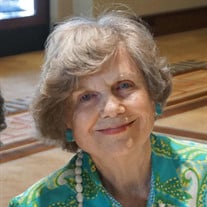 Frances Dossett Swann died on December 11, 2021, and entered into the nearer presence of the Holy Trinity. She was born on May 22nd, 1929, in Waco, Texas, the fourth and last child of Walter B. and Alethea Sleeper Dossett. After graduating from Waco schools, she attended Mount Vernon Junior College in Washington D.C. From there she followed her older siblings to the University of Texas in Austin where she was a member of Pi Beta Phi, and where she met her future husband, Tommy Swann. After marriage they settled in Tyler in January 1950, when Tommy joined his father and brother in the furniture business. Frances, often called Poosie, was a lifelong Episcopalian, actively engaged in the work and worship of Christ Church Tyler. For over 20 years, she led interdenominational Bible studies and spiritual growth groups in her home. She was also involved in the community, serving on the boards of the Junior League of Tyler, All Saints School, The Salvation Army, and Hospice of East Texas. Frances liked to read and study and in mid-life she returned to college and received a master’s degree through the SMU Extension Program. She enjoyed many games, especially bridge, Scrabble, crosswords and tennis (before knee surgery). Frances and Tommy were enthusiastic travelers both in the states and abroad, but her happiest hours were spent in Texas with family and friends. Her relationship with Jesus Christ was her greatest treasure. After the death of her husband in 2015, her caretaker and companion, Rochelle Scott, lived with her. Words cannot express the gratitude of her family for Rochelle’s loving care. Frances was preceded in death by her husband of 65 years, Thomas Rowland Swann; and by siblings, Jane D. Brooks, Laura D. Smith and Walter Brown Dossett, Jr.; plus a heavenly host of other family and friends. She is survived by three children, Thomas D. Swann and wife Laura of Waco; Andrew R. Swann and wife Rosemary of Tyler; Alethea Swann Bugg and husband J. Bruce Bugg, Jr. of San Antonio; by four grandchildren, Elizabeth T. Swann and soulmate Jason Leubner of Seattle, Washington; Alice Swann Troberman and husband Toby Troberman of Dripping Springs; James B. Bugg, III of Nashville, Tennessee; and Thomas Andrew Bugg of San Antonio; and by three great-grandchildren, Dossett, Evans, and Leni Rose Troberman. She is also survived by several nieces and nephews and by dozens of cousins. She leaves behind many friends. Especially close were Jill Ramey, Sue Deakins, Cecil Ward and Dot Thrower. A memorial service for Frances Swann will be held on Wednesday, December 22nd at 11:00 a.m. at Christ Episcopal Church, 118 S. Bois d ‘Arc, Tyler, Texas. At a later date, her ashes will be interred with her husband at Oakwood Cemetery in Waco, Texas. Memorial gifts may be made to Christ Episcopal Church Endowment Fund (118 S. Bois d ‘Arc, Tyler, Texas. 75702), The Hospice of East Texas Foundation (4111 University Blvd., Tyler, Texas 75701), or to the charity or church of your choice.

Frances Dossett Swann died on December 11, 2021, and entered into the nearer presence of the Holy Trinity. She was born on May 22nd, 1929, in Waco, Texas, the fourth and last child of Walter B. and Alethea Sleeper Dossett. After graduating... View Obituary & Service Information

The family of Frances Dossett Swann created this Life Tributes page to make it easy to share your memories.

Send flowers to the Swann family.