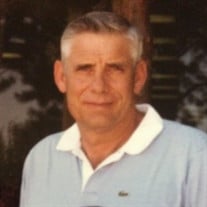 Fred Calvin Kniffen, Jr., 84, of Tyler entered Heaven's gate June 24, 2020. We take great comfort in knowing he claimed his victory in Jesus and is now strolling over heaven with the love of his life, our Mother. Fred was born, September 7, 1935 and raised in Clyde, TX on a farm, where he worked hard planting and harvesting crops in the fields, milking cows and picking cotton with the rest of his family. His parents always allowed him time to play sports. He played football, basketball, baseball and tennis. Tennis was his favorite and he became a State Champion in High School. He then attended Hardin Simmons University, the first in his family ancestry to attend college. He was an officer in the ROTC and helped bring the HSU tennis program to National prominence winning Championships all along the way. On August 24, 1957, he married his high school sweetheart, Carolyn Johnson. They lived in Abilene, TX for 16 years, then moved to Tyler where they spent the next 45 years. They shared a special love. They were a team. They loved, and they were loved. He was a pioneer in Texas tennis. His career included Tennis Coach at Cooper High School in Abilene and Tennis Pro at Rose Park Tennis Center in Abilene. He then moved to Tyler in 1973 to start the Tennis Tech Program, the first of its kind. The Tennis Tech Program is now an internationally known program that brings students seeking a career and a degree teaching and managing tennis programs, to TJC from all over the world. At the same time, he was the Head Tennis Coach for Tyler Junior College. In 1985, he accepted the Head Tennis Coach position at The University of Texas at Tyler, where he retired in 1997. During these years, Fred also started week-long, overnight tennis camps, along with his brothers Johnny and Novice, and countless other coaches. They held tennis camps for players all across Texas every summer for 48 years. He is one of the most celebrated coaches in Texas Tennis history earning the Texas Professional Tennis Association (TPTA) Coach of the Year award; the Wilson National Coach of the Year twice, the National Junior College Men’s Coach of the Year twice; the National Women’s Coach of the Year twice; the Penn NAIA National Coach of the Year twice, National Championships at TJC and UT Tyler; and more. He also helped 31 players earn All-American honors and was inducted into the following Hall of Fames: 1990 Hardin-Simmons University Hall of Fame 1993 Texas Tennis Coaches Association Hall of Fame 1993 National Junior College Coaches Association Hall of Fame 1996 National Association of Intercollegiate Athletics (NAIA) Hall of Fame 1999 Texas Tennis Hall of Fame 2001 Tyler Junior College Circle of Honor 2012 UT Tyler Athletics Hall of Fame 2015 Intercollegiate Tennis Association (ITA) Hall of Fame With all of the fame, Fred was still a wonderful, loving, humble servant of God. A devoted husband and father. He will be remembered for the love he shared with his beloved wife, his love of family, friends, students, tennis players and everyone he met. He was our example of Jesus loving and serving on this earth. Our home was always open for those needing a place to stay (short or long-term), or to share a meal, Wednesday night Devotionals, tennis lessons, or he would just be “available” to take you to get a haircut if he thought you needed one. He was an icon in the tennis community not only in Texas, but throughout the nation. He touched thousands of lives using tennis as his tool. His impact on students and players from decades ago to present-time will never be forgotten. He is survived by his children and spouses, Janet (Jeff) Scholl, Dallas, TX; Judy (Travis) Clardy, Nacogdoches, TX; J'Lynn (Micky) Navarro; Dale (Wendy) Kniffen; 13 loving grandchildren; 9 great-grandchildren; his brothers, Johnny, Novice, Paul and Billy Kniffen, and his sister Jean Kniffen Seagroves, and countless cousins. He was preceded in death by his wife, Carolyn Janet Kniffen; and his parents, Fred & Iona Kniffen. The family will receive friends on Saturday, June 27th from 6:00 to 8:00 p.m. at Stewart Family Funeral Home, 7525 Old Jacksonville Hwy, Tyler. A dessert bar will be set up for you to enjoy in honor of Fred’s infamous sweet tooth. A funeral service celebrating his life will be held Sunday, June 28, 2020 at 2:00 p.m. at Shiloh Road Church of Christ, 1801 Shiloh Rd, Tyler. There will also be a Live Stream Broadcast for those unable to attend. Go to Shiloh Road Church of Christ Facebook page Sunday prior to the service and a link will be available at that time. Burial will follow at Rose Hill Cemetery. Special Request: Anyone that earned a Hall of Fame Jacket, please wear it in his honor. In lieu of flowers, memorial donations may be made to support the tennis programs at Tyler Junior College or The University of Texas at Tyler in Coach Fred Kniffen’s memory. TJC donations may be made at www.tjc.edu/giving and select “Fred Kniffen Memorial Gift” UT Tyler donations may be made at https://elevate.uttyler.edu/fred-kniffen Game.Set.Match. Well done Coach. This is the day the Lord has made. We WILL rejoice and be glad in it. Psalm 118:24

Fred Calvin Kniffen, Jr., 84, of Tyler entered Heaven's gate June 24, 2020. We take great comfort in knowing he claimed his victory in Jesus and is now strolling over heaven with the love of his life, our Mother. Fred was born, September 7,... View Obituary & Service Information

The family of Fred C. Kniffen created this Life Tributes page to make it easy to share your memories.

Send flowers to the Kniffen family.