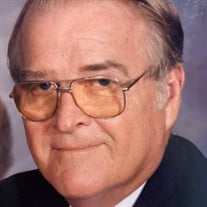 Gary Linn Forbis died September 12, 2021 in Tyler, Texas at the age of 81 years 11 months 1 day. Memorial Services are scheduled for Saturday, September 18, 2021 at 11:00 a.m. at Grace Community Church in Tyler under the direction of Stewart Family Funeral Home. Gary was born October 11, 1939, in Chickasha, Oklahoma to Hugh Noland and Chessie (Yeary) Forbis. He was raised and attended school in Chickasha, graduating around 1957. Gary was inducted into the United States Army on January 25, 1956, proudly serving his country, until his honorable discharge on April 12, 1962. On August 20, 1966, Gary and Peggy Lee Paramore were united in marriage in Chickasha, Oklahoma. They made their home in the Tuttle area. In 1963, Gary became an Oklahoma licensed Funeral Director, working throughout the years at Sevier Funeral Home in Chickasha as well as helping in 1991 to establish Wadley’s Funeral Home in Purcell, Oklahoma. Gary served as a Chickasha Police Officer, as the Tuttle City Manager, an Emergency Medical Technician, and the Director of the Emergency Medical Services for the State of Oklahoma until his retirement in 1986. Gary had a heart for bettering his community and a gift for helping those in need. Gary loved spending time with his family, and loved his wife, children and grandchildren without measure. In his free time, Gary enjoyed treasure hunting, metal detecting, fishing, camping, reading and studying old west history. Gary was a member of the American Legion and a Scottish Rite Mason. He was an amazing family man, mentor, and friend. Gary was preceded in death by his parents, Hugh Noland and Chessie Forbis; sister, Imogene Metcalf; his brothers, Don Forbis, Wesley Forbis; and his great-grandson, Mauricio Florez. Survivors include his wife of 55 years, Peggy Forbis of the home; his daughter, Kim Jones of Norman, OK; his daughter, Kelly Coker and husband, Kenneth of Tyler, TX; his daughter, Kara Loeffelholz and husband, Danny of Flint, TX; his 9 grandchildren: Kayla Burnough, Tyanne Burnough, both of Oklahoma City, OK; Marcus Burnough, Derrick Burnough, both of Norman, OK; Arianna Coker of Calera, OK; Anna Coker of Tyler, TX; Eli Loeffelholz, Nate Loeffelholz, Thadd Loeffelholz, all of Flint, TX; 10 great-grandchildren; his sister, Sharon Strain and husband, Bill of Aledo, TX; his brother, Keith Forbis and wife, JoAnn of Florida; and numerous other relatives and friends. Dear Friends and Family, to view the livestream of Gary's service please go to: https://gcc.org/live-streaming/oj

Gary Linn Forbis died September 12, 2021 in Tyler, Texas at the age of 81 years 11 months 1 day. Memorial Services are scheduled for Saturday, September 18, 2021 at 11:00 a.m. at Grace Community Church in Tyler under the direction of Stewart... View Obituary & Service Information

The family of Gary Linn Forbis created this Life Tributes page to make it easy to share your memories.

Send flowers to the Forbis family.