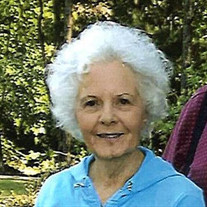 Gay Marlene Odom, 83 years of age, passed away peacefully in her home on December 4, 2021 with her family by her side when she was called to return to her heavenly home by her Heavenly Father and her Savior and Redeemer, Jesus Christ. Gay was born in Fond du Lac, Wisconsin on April 29, 1938 to her parents, Bernard August William Nimmer and Ruth Marie Utke Nimmer. She and Joe met in 1956 and were married on June 6, 1958 in Pensacola, Florida. Their marriage was further solemnized and sealed for time and all eternity on June 11, 1958 in the Logan Utah Temple of The Church of Jesus Christ of Latter-Day Saints. Gay was preceded in death by her parents and her 4 brothers, Milo, Donald, William and John. Gay is survived by her husband, Joseph (Joe) Odom; son, Mark Edward (Martha) of Kansas City, KS; daughter, Cheri Lyn DeTraz of El Dorado, AR and daughter, Lisa Gaye Moore (Kyle) of Tyler. Gay is also survived by 9 grandchildren and 25 great-grandchildren. Gay’s greatest joy was in caring for and loving her family. She felt very blessed that she could be a full-time homemaker for her husband and children. Her family was greatly blessed by her skills and talents. Her love for her family was followed closely by the joy she received in serving the Lord in His church. Gay was a lifelong, devoted and faithful member of The Church of Jesus Christ of Latter-Day Saints. She fulfilled many leadership and teaching positions in her church service in children, youth and women’s organizations. One of Gay’s greatest loves in performing church service were the 25 years she spent serving as a temple worker in the Dallas Texas Temple of The Church of Jesus Christ of Latter-Day Saints. Gay enjoyed doing research on her family history. She compiled and accumulated many records on her ancestors and had developed a sizable family history tree. Gay had a beautiful soprano voice and loved to sing. She participated in church choirs and was asked to perform solos at church services and to sing with choral groups. Gay was a member of the Tyler Civic Chorale for 23 years, performing with that group from 1982-2005. Prior to moving to Tyler, Gay sang with the South Arkansas Arts Theater group in El Dorado, AR from 1977-1979 and with the West Florida Music Festival Chorus in Pensacola, FL from 1974-1977. Funeral services will be held at 11:00 a.m. on Thursday, December 9, 2021 at The Church of Latter-Day Saints, 23000 CR 145, Bullard, TX 75757. Visitation will be on Wednesday, December 8, 2021 from 6:00-8:00 p.m. at Stewart Family Funeral Home in Tyler. Interment will be at Rose Lawn Cemetery under the direction of Stewart Family Funeral Home.

Gay Marlene Odom, 83 years of age, passed away peacefully in her home on December 4, 2021 with her family by her side when she was called to return to her heavenly home by her Heavenly Father and her Savior and Redeemer, Jesus Christ. Gay was... View Obituary & Service Information

The family of Gay Marlene Odom created this Life Tributes page to make it easy to share your memories.

Gay Marlene Odom, 83 years of age, passed away peacefully in...

Send flowers to the Odom family.