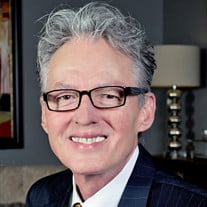 Services for George Malcolm McNeil Jr., 64, of Tyler will be held on Wednesday, December 11, 2019 at 2:00 p.m. in the Stewart Family Funeral Home Chapel with Pastor Paul Bolding officiating. Burial will follow at Rose Hill Cemetery in Tyler under the direction of Stewart Family Funeral Home. Mr. McNeil passed away Wednesday, December 4, 2019 in Tyler, Texas. He was born August 9, 1955 in Alexandria, Louisiana to George Malcolm McNeil Sr. and Rose Darline Williams McNeil. George graduated from Spiro High School (Spiro, OK) in 1973. His high school activities included student senate, band (president senior year), football, basketball and principal’s cabinet. He attended Oklahoma Baptist University and majored in Fine Arts and Vocal Music with a minor in piano. He sang in the Bison Glee Club choir, which is an auditioned group of outstanding male musicians on campus, and he served as youth minister at Spiro First Baptist Church while attending OBU. George had an established career in sales and interior design. He held the position of Sales Manager with Swann’s Furniture & Design. He was also a member of Green Acres Baptist Church. George was preceded in death by his mother, Rose Darline Williams and his father, George Malcolm McNeil Sr. He is survived by his loving family including two daughters, Lauren Terkel and her husband Michael of Plano, Texas, and Natalie McNeil of Plano. He was the proud grandfather of two grandchildren, Jackson and Ava Terkel. He is also survived by two siblings, Ken McNeil and his wife, Candy, of Maud, Texas; and Dianne Caron and her husband Thomas, of Tyler; as well as numerous extended family and close friends. If desired, memorials may be made in George’s honor to Green Acres Baptist Church www.gabc.org.

The family of George Malcolm McNeil Jr. created this Life Tributes page to make it easy to share your memories.

Services for George Malcolm McNeil Jr., 64, of Tyler will be...

Send flowers to the McNeil family.