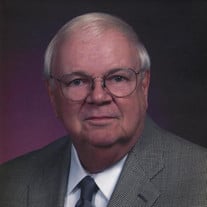 George Anthony Ward, passed away peacefully in his sleep Sunday, March 22, 2020. He was 86. George was born July 21, 1933, to George C. and Amie R. Ward in Cumberland, MD. He graduated from Allegany High School and the University of Maryland. His university studies were interrupted when he was drafted into the U.S. Army in 1953. He served as a radio repairman at the Big Delta Air Force Base in Alaska during the Korean War. While in military service, he married JoAnn Bopp, also of Cumberland, MD. After the war, he returned to the University of Maryland and completed a business degree. He enjoyed a long career at Kelly Springfield Tire Company, where he worked in a number of roles, beginning at the Cumberland plant and transferring to the Tyler, TX, plant in 1962. He served as the Materials Manager at the Tyler plant, responsible for shipping, receiving, and production control. After a 30-yr career, George retired from Kelly Springfield in 1987. George enjoyed many years in Tyler, where he was a member of First Presbyterian Church. He was an avid collector of stamps and early American memorabilia, such as pocket knives and pocket watches. He was a zealous fan of NASCAR, a passion which took him to many racetracks around the nation. His favorite activity, however, was spending time with his second wife, Frances, and his children and many grand- and great-grandchildren. His happiest hours were spent with his family on the beaches of Florida. George was predeceased by his wife of 45 years, JoAnn. He is survived by his loving wife of 24 years, Frances, also of Cumberland, MD; sons, George A. Ward, Jr., Tom and Leslie Ward; two daughters, Karen and Dr. Charles Heaton, Dr. Amie S. Ward and husband Charles A. Smith; seven grandsons; and eight great-grandchildren. The family will have a private graveside service at Cathedral in the Pines Cemetery under the direction of Stewart Family Funeral Home with Pastor Ryan Heaton officiating. Honorary pallbearers are the Hon. Taylor Heaton, Clay Heaton, Cody Ward, Tucker Ward, Trent Ward, and Travis Ward. If desired, memorials may be made to St. George’s Episcopal Church, P. O. Box 655, Mt. Savage, MD 21545.

George Anthony Ward, passed away peacefully in his sleep Sunday, March 22, 2020. He was 86. George was born July 21, 1933, to George C. and Amie R. Ward in Cumberland, MD. He graduated from Allegany High School and the University of Maryland.... View Obituary & Service Information

The family of George A. Ward created this Life Tributes page to make it easy to share your memories.

George Anthony Ward, passed away peacefully in his sleep Sunday,...

Send flowers to the Ward family.