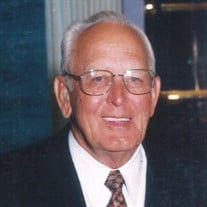 George John Weisser passed away peacefully in Tyler, Texas May 22, 2021, he was 96 years old. George was born July 1, 1924, in Long Island City, New York to George J. and Josephine (Kase) Weisser. He served in the U. S. Army during WW II as a surgical technician on the Hospital Ship Wisteria, where they evacuated wounded from the European theater. On the Wisteria he met and later married a nurse Juanita Henegar. George and Juanita had two children John and Melinda. George had an extensive career in Government; he started at the Atomic Energy Commission in Oak Ridge, Tennessee, Portsmouth, Ohio, and Chicago, Illinois. He was involved with various Universities conducting research work for the Government including Atoms for Peace, Nuclear Aircraft, and Nuclear Submarine Programs. He served as a member of the Emergency Response Team to maintain essential government activities in an event of a natural disaster during the Cold War. He became Director of Industrial Relations for the Space Nuclear Propulsion Office at the Nuclear Rocket Development Station in Nevada where he was also appointed by the Governor of Nevada to several committees to increase the economic base of the state. Later he was transferred to the Savannah River Plant near Aiken, South Carolina where he retired from Government work. While in Aiken he served as President of the Services Council a group that provided a Head Start Program for underprivileged children. He also worked with several colleges to assist minority students in finding employment. Additionally, he worked with the newly established Aiken Technical College in establishing a nuclear technician program. Following retirement, he was employed as Personnel Director of the Project Management Corporation in Oak Ridge, Tennessee. George and Juanita retired to Las Cruces, New Mexico where he volunteered at the Las Cruces Museum of Natural History and became President of the foundation that funded the museum. After ten years George and Juanita returned to Las Vegas, Nevada where George became involved with both the Las Vegas Museum of Natural History and the State Museum run by the Nevada Historical Society. This love for history then translated to entering the Seniors Program at the University of Nevada where he taught Southwestern History and Indian Culture. It was during this time that George lost Juanita. They were married for over 50 years. Sometime later through his University friends, he met Joanne at a church dinner and they later married. George and Joanne have been married for over 22 years and have loved traveling all over the world and United States. They moved to Tyler where George became a Master Gardener. George also served on the Board of Directors for his homeowners association and volunteered for the Salvation Army’s Christmas Toy distribution. George was preceded in death by his parents; sister Alice and brother-in-law Bill Burk; and step-grandson Jonathan Brafford. He is survived by his loving family including wife Joanne Weisser; son John (Linda) Weisser; daughter Melinda (Ken) Weisser-Lee; step-children Katherine (Michael) Vintges, Kenneth Sceirine, and Suzann (Lonnie) Howard; grandchildren George Weisser, Tiara (Mick) Maddox; step-grandchildren Tanya Ferris, Zachary Humble, Heather Lee, Jacquelyn Brafford, and Christine (Travis) Leech; 7 great-grandchildren; and 3 great-great-grandchildren. If desired, memorials may be made to Pets Fur People, 1823 CR 386, Tyler, TX 75708 (https://petsfurpeople.org); SPCA of East Texas, P. O. Box 132899, Tyler, TX 75713 (http://spcaeasttx.com); and Highway 80 Rescue Mission, 601 E. Valentine St, Tyler, TX 75702 (https://hiway80rm.org). Memorial/Celebration services for George Weisser will be held on Saturday, June 12, 2021, at 10:00 a.m. at Stewart Family Funeral Home Chapel with Reverend Barbara Morgan officiating under the direction of Stewart Family Funeral Home.

George John Weisser passed away peacefully in Tyler, Texas May 22, 2021, he was 96 years old. George was born July 1, 1924, in Long Island City, New York to George J. and Josephine (Kase) Weisser. He served in the U. S. Army during WW II... View Obituary & Service Information

The family of George John Weisser created this Life Tributes page to make it easy to share your memories.

George John Weisser passed away peacefully in Tyler, Texas May...

Send flowers to the Weisser family.