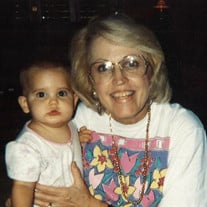 A SALUTE TO GEORGIA MARLENE ROBERTS RIEK By Bob H. Riek&#8230; Dec. 2020 Marlene is not a person who toots her own horn, so being her biggest fan, it is up to me to toot it for her. She is a life-time (student); learning so many different subjects... View Obituary & Service Information

The family of Georgia Marlene Roberts Riek created this Life Tributes page to make it easy to share your memories.

Send flowers to the Riek family.