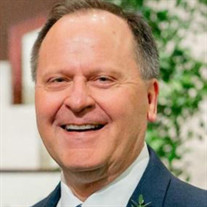 Gilbert Randolph Hearn, 64, holding the hands of his wife and children, was peacefully called home Wednesday, April 28, 2021, following a courageous eight-month battle with cancer. He was born January 23, 1957 at Baylor Hospital in Dallas. The son of Wilbur Randolph and Rachel Anne (Morrow) Hearn, Gilbert grew up in Richardson, Texas, attending all 12 grades there. He graduated from Berkner High School in 1975. Gilbert attended Abilene Christian University, graduating in 1979 with a degree in marketing. Two months later, he began his career in customer service for the former Texas Power & Light (TP&L) in Lancaster, Texas. In 1991, Gilbert moved to human resources at the Dallas corporate office of Texas Utilities (former TP&L) where he would find a career that matched his desire to help people through the seasons and circumstances of life. In 1984 Gilbert was introduced by a dear mutual friend to Susan Elise Gregory. Three years later, they married at Broadway Church of Christ in Tyler on May 16, 1987. They later would have two children, Clinton Randolph and Emily Elise. Gilbert and Susan moved their family to East Texas in 2000, but Gilbert would continue to commute to Dallas for five more years, eventually completing 26 years with TXU (Texas Utilities). Leaving TXU so that his job would be closer to home, he would spend seven years in human resources with Russell & Sons Construction. At the time of his death, Gilbert was a benefits manager with Mewbourne Oil Company in Tyler, his employer for the past eight years. He was always grateful to each company for the professional opportunities given, but more importantly for the friends he made along the way. Gilbert was a member of the Church of Christ, having become a Christian at the age of 10. For the past 21 years, his church home has been Broadway Church of Christ in Tyler. Throughout his adult life Gilbert was a bible class teacher of ages ranging from preschool through college. He was also a volunteer with PTA, Boy Scouts, 4-H, FFA, and East Texas Christian Academy. Gilbert was a charter member of the Lancaster, Texas Rotary Club in 1984. Gilbert was a selfless, caring, steadfast Christian husband and father. He had a great capacity for loving people, and he did so with great empathy and compassion. His humor, quick wit, and laughter brought joy and light to all of those who knew him. He was happiest when spending time with family and friends. If he called you friend, you knew he loved you as family. He was preceded in death by his parents and sister Charlotte Hearn Dodrill. Gilbert is survived by his wife Susan of Flint; son Clint and his wife Katy of Haslet; Emily Dotson and her husband Cole, of College Station; mother-in-law Jackie Gregory of Tyler; brother-in-law Mark Gregory and wife Angel of Mesquite; niece Lauren Long and her husband Riley, of Dallas; nephew Landon Gregory and his wife Kelsey of Dallas; great-nephew, Ranger Long; and a family of friends. Pallbearers will be Randy Clinton, Jack Conner, Dave Harness, Les Lierman, Bud Marsh, Mark Miller, and Tim Yarbrough. Services will be held at 10:00 a.m., Wednesday, May 5, 2021 at Broadway Church of Christ in Tyler with Phil Hancock and Robert Taylor officiating. Burial will follow at Cathedral in the Pines in Tyler under the direction of Stewart Family Funeral Home. Visitation is scheduled from 5:00 – 7:00 p.m. on Tuesday, May 4, 2021 at Stewart Family Funeral Home, 7525 Old Jacksonville Road in Tyler. The family would like to thank Dr. Murphy and the team of physicians and staff at MD Anderson in Houston, Dr. Marc Usrey of Hope Cancer Center in Tyler, along with Hospice of East Texas for their excellent and kind care. If desired, memorials may be made to Hospice of East Texas, 4111 University Blvd, Tyler, TX 75701 or ChristianWorks For Children, 5440 Harvest Hill Rd, #140, Dallas, TX 75230.

The family of Gilbert Randolph Hearn created this Life Tributes page to make it easy to share your memories.

Gilbert Randolph Hearn, 64, holding the hands of his wife and...

Send flowers to the Hearn family.