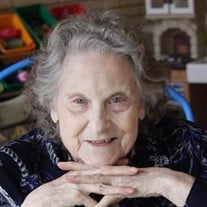 Former Palestine resident Ginger Brooks, 91, passed away Tuesday, 15 February 2022 in Tyler, Texas. Mrs. Brooks was born 3 December 1930 in Alexandria, Louisiana to Willie and Josephine (Funderburk) George. She learned from a close-knit family to help family and friends in their community of Sieper, Louisiana. After high school, Mrs. Brooks visited a sister in Biloxi, Mississippi and met the love of her life. Donald (Don) Brooks was a member of the United States Air Force and they married in 1949. They traveled with the Air Force for 20 years and had two children: James Steven Brooks and Debra Ann Brooks Speer. After retiring in 1966, they moved to Palestine, Texas where Mr. Brooks worked at the Balloon Base (NCAR) and Mrs. Brooks was a life-long homemaker and gardener. She remained in Palestine for several years after her husband’s death. The family became members of Westwood Baptist Church (Emmanuel Baptist) in 1966 and Mrs. Brooks served as Sunday School Director, VBS Director and Hospitality Chair as well as teaching youth Sunday School. She loved the kids and taught them that Jesus loved them. Mrs. Brooks is predeceased in death by her husband, Donald Brooks (2003) and her son, James Steven Brooks (2010), as well as her parents and siblings. She is survived by her daughter, Debra Brooks Speer and husband, Raymond (Ray) Speer of Hawkins, Texas; granddaughter, Tonya Marie Rappe and husband, Joseph (Joe) Rappe; great-grandsons Steven Fayne (Fayne) Speer and Jack Christian (Jack) Rappe of Pittsburg, Kansas; grandson, Daniel Fayne Speer and wife, Shelley Speer; and great-granddaughter, Annalee Civil (Civie) Speer of Tyler, Texas. Mrs. Brooks or “Nonnie” as she was called by most, adored her family and always had a big smile and lots of hugs and kisses. She will be missed by all that knew her. Nonnie is now healed of the Alzheimer’s that took her mind but never took away her sweet spirit. Now, she’s praising Jesus and seeing all those that have gone before!!

The family of Ginger G. George Brooks created this Life Tributes page to make it easy to share your memories.

Send flowers to the Brooks family.