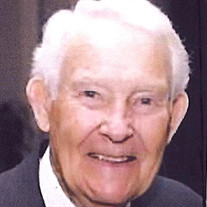 Glendel Lloyd “Boots” Gill of Tyler, TX, passed away peacefully in his sleep on July 13, 2021, at the age of 92. He now rests at the feet of Jesus. Boots was born on September 26, 1928, to Helen and Lloyd Gill in Harrisburg, Illinois. He spent the first four years of his life in the coal mining town of Harco, Illinois, before moving to New Haven, Illinois. As a young adult, he worked as a barber before being drafted in the Korean War. After serving his country, he gained employment in the oil and gas business, which became his lifelong career. He was a member of Green Acres Baptist Church and served as deacon for many years. Boots met his first wife, Mary Evelyn Bayley, a school teacher, in 1953. They married that year and went on to have five children: Stan (Ros), Beth (Ray), Scott (Jennie), Dawna (Ben), and Kat (Ned). His career in the oil industry relocated his family from Illinois to Indiana, Louisiana, and finally to Texas, where he retired in 1986. Boots enjoyed fishing, golfing, gardening, motorcycling, and spending time with his friends and family. In 2011 Boots’ wife, Mary passed away. He stayed in Tyler, where he later met and married Rachel Bridges. Boots is survived by his beloved wife, Rachel; his five children and their spouses; his 11 grandchildren; and 7 great-grandchildren. He is predeceased by his adored wife, Mary; his parents, Helen and Lloyd; and his brother, Bob. A memorial service will be held on Saturday, July 31, 2021 at 10:30 a.m. at Stewart Family Funeral Home in Tyler with Dr. David O. Dykes officiating.

The family of Glendel "Boots" Lloyd Gill created this Life Tributes page to make it easy to share your memories.

Send flowers to the Gill family.