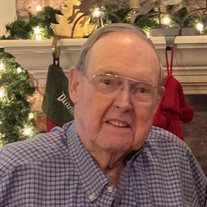 Leon Glenn Taylor, passed away on October 25, 2021, in Tyler, Texas. Glenn was born to Leon C. Taylor and Thelma Lawrence Taylor in Tyler on May 29, 1933. Growing up in Tyler, Glenn began his education at Gary Elementary School, and he graduated from Tyler High School in 1951. Glenn attended The University of Texas, where he was a member of Beta Theta Pi. Glenn graduated from The University in 1955 with a bachelor’s degree in business administration, and he would be a loyal and faithful Longhorn the rest of his life. Glenn married Joan Hertz on November 8, 1958. He enjoyed a long and successful career as an independent insurance agent which spanned six decades. Glenn was preceded in death by his beloved wife Joan, who passed away in 2013. He is also preceded in death by his father Leon C. Taylor and mother Thelma Lawrence Taylor, and by his brothers-in-law, Gary Shipman and Bob Boldt. Glenn is survived by his children, grandchildren, and great-grandchildren: son Tim Taylor and his wife Kathy; daughter Rebecca Taylor and her husband Lee Scott, M.D.; and daughter Diana Taylor McMillan, her husband Scott McMillan. He is survived by his grandchildren who loved their Glenn dearly. Kathy and Tim’s children, Timothy Charles Taylor, Jr.; Kathryn Taylor Dean and her husband Mark Dean, D.D.S. (and Glenn’s great-grandsons, Peter Alan Dean and Micah Charles Dean); Mary Elizabeth Taylor Fleming and her husband Parker Fleming; and Claudia Anne Taylor; and by Diana’s children Taylor Margaret Smith and Marshall King Smith. Glenn is also survived by his sisters, Suzanne Shipman and Judy Boldt, and many nieces and nephews and their families. Glenn was a wonderful father, loving his children, and with Joan, Glenn set an example of what it meant to serve one’s church and give back to one’s community. Glenn’s civic involvement and leadership was extensive. For decades he was a faithful member of Christ Episcopal Church, where he served in many roles including on the Vestry. He served on the Tyler City Council and was Mayor Pro Tem. Glenn was a member of the South Tyler Rotary Club for decades and a past president. He was a member of the Order of the Rose, and Glenn and Joan were involved in many Rose Festival activities. Joan and Glenn’s love for the Rose Festival was highlighted by their daughter Becky’s participation as a Lady in Waiting in 1983 and then in 1984 when their daughter Diana was Rose Queen. Glenn was also involved with and served many other organizations, including Henry Marsh Bell Lodge No. 1371, A.F. & A.M., the Shriners, YMCA, and Ducks Unlimited. Glenn was a loyal Texas Ex and loved The University of Texas at Austin. He was active in the Tyler Chapter of the Texas Exes for decades, and he was on the board and served as President. He also served the Texas Exes as the Regional Vice President and he was the district councilmember on the Ex-Students Association Executive Council. A service in celebration of Glenn’s life is being planned for the Saturday after Thanksgiving, November 27, which will be held at Christ Church in Tyler, at 11:00 a.m. In lieu of flowers, the family requests that memorial contributions be made to Christ Church - Episcopal, in Tyler, to the SPCA of East Texas, or to The Hospice of East Texas.

Leon Glenn Taylor, passed away on October 25, 2021, in Tyler, Texas. Glenn was born to Leon C. Taylor and Thelma Lawrence Taylor in Tyler on May 29, 1933. Growing up in Tyler, Glenn began his education at Gary Elementary School, and he graduated... View Obituary & Service Information

The family of Glenn Taylor created this Life Tributes page to make it easy to share your memories.

Send flowers to the Taylor family.