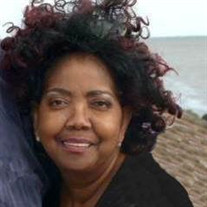 Services for Goldie B. Hudeck, 58, of Flint and Galveston, Texas will be held on Thursday, October 10, 2019 at 2:00 p.m. in the Stewart Family Funeral Home Chapel with Rev. Sherman Mayfield officiating. Visitation will begin one hour prior to the service. Interment will follow at Rose Lawn Cemetery in Tyler under the direction of Stewart Family Funeral Home. Mrs. Hudeck passed away Saturday, October 5, 2019 at her home in Flint. She was born December 9, 1960 in Houston to Pete Williams and Lucille Williams-Hardaway. Goldie was a member of Macedonia Missionary Baptist Church in Galveston. She graduated from Jack Yates High School in Houston in 1979. She began working for Kroger in 1977, while still in high school, transitioning to a full-time position following graduation. Goldie attended Texas Southern University for 2 years and became a licensed cosmetologist. She assisted her mother, Lucille in running a part-time café and beauty shop, while also working at Kroger as a checker. Her experience in the grocery business eventually progressed to management positions at Safeway and Food Lion. When Food Lion ceased operation in Houston, she became an officer for The Texas Department of Corrections in 1996 until her retirement in 2010 due to illness. Goldie was preceded in death by her mother, Lucille Williams-Hardaway in 2001 and her father, Pete Williams in 1972. She leaves behind to cherish her memory, her devoted husband, James Warren Hudeck; her brothers, Ray Williams and Caesar "Cecil" James Robinson; and her sisters, Essie Marie Wilson and Myrtle James Dixon. Pallbearers will be Ray Williams, Michelle Mueller, Mark Johnson, Vincent Prince, Keith Allison and Randy Hotz. Honorary pallbearers will be Bennie Cutright and Vonney Edwards. If desired, memorials may be made to the Lupus Foundation of America 2121 K St. NW, Ste. 200, Washington, DC 20037.

Services for Goldie B. Hudeck, 58, of Flint and Galveston, Texas will be held on Thursday, October 10, 2019 at 2:00 p.m. in the Stewart Family Funeral Home Chapel with Rev. Sherman Mayfield officiating. Visitation will begin one hour prior... View Obituary & Service Information

The family of Goldie B. Hudeck created this Life Tributes page to make it easy to share your memories.

Services for Goldie B. Hudeck, 58, of Flint and Galveston, Texas...

Send flowers to the Hudeck family.