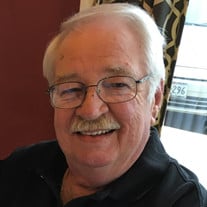 A memorial service for Grady Franklin “Frank” Alexander, Jr., 77, of Flint, Texas, will be held on Monday, July 13, 2020, at 2:00 p.m. in the Stewart Family Funeral Home chapel at 7525 Old Jacksonville Highway in Tyler. Mr. Alexander went to be with the Lord on Thursday, July 9, 2020, in Flint. He was born November 3, 1942, to Beatrice and Grady Franklin Alexander, Sr. He was preceded in death by his parents and his loving sister and brother-in-law, Judy and Butch Roach. Frank graduated from John Tyler High School and attended Tyler Junior College. He grew up playing football and baseball as a child and young adult. He held the position as conductor for the Cotton Belt Railroad (later Southern Pacific, then Union Pacific) until his retirement after 50 years. He also served as a local chairman of the UTU. Through the years, Frank enjoyed the outdoors. He found pleasure in hunting, fishing, golfing, farming, and working on his land. He was a big sports fan and especially loved the game of baseball. He liked playing, coaching little league, and was later in life seen regularly wearing his St. Louis Cardinals hat. Frank enjoyed spending time with friends, either going out to dinner or sitting on his back porch. Frank is survived by his family and many lifelong friends who loved him.

The family of Grady Franklin "Frank" Alexander Jr. created this Life Tributes page to make it easy to share your memories.

Send flowers to the Alexander family.