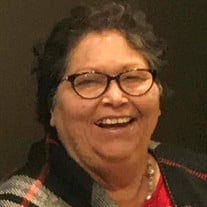 Guadalupe had more than nine lives and we never thought she would leave us. She survived so many health challenges over the years even when the odds were against her. And, yet through it all, she was our sassy matriarch who led us with dignity, courage, integrity, unabashed directness, humor, and so much love. “Pe” as she was nicknamed by her physical therapist and “Pyro Pe”, as she was fondly called by her family because of her affinity to start fires, accomplished a lot while she was in this physical world. Her work ethic was established as a child when she began picking cotton at age six until age 18. Traveling across the country as a migrant worker and returning often after the start of the school year did not deter her from finishing high school. Indeed, it inspired her to walk onto the campus of Del Mar College and announce that she was there to go to school without the money to pay for college or an understanding of how to navigate the application process. Unsurprisingly inspiring, the college waived her application fee and gave her scholarship to nursing school. Upon graduation, she worked as a nurse for 25 years, before leaving to work alongside her husband at their business, that continues to grow 38+ years later. While she was a wife to Luis for 55 years, a mother to four children, six grandchildren and two great-grandchildren, she was so much more. Pe adored Patrick who she considered her “homeboy” and never missed a Kansas City game. She enjoyed making arts and crafts, but loved giving away her creations to family, friends, and strangers even more. One of her proudest accomplishments was having all her children graduate from college. Our mom was larger than life because nothing she did was “small.” Simplicity is beauty in and of itself was not her life’s mantra, but rather she subscribed to the notion that more is better – adding more flowers in a flower arrangement, she created and showering her grandchildren and great-grandbabies with more hugs and kisses than necessary because these signs of affections were missing from her childhood are illustrations of her mantra in practice. She leaves her husband and family with a legacy of knowing unconditional love. We are the grateful beneficiaries of her boundless gifts of wisdom, affection, kindness, and are forever grateful to have had her in our lives. Pe your wings were ready to fly to a Heavenly new home, but our hearts are struggling to let you go. You leave us with a lifetime of cherished memories and the knowledge that one day we will see you again.

Guadalupe had more than nine lives and we never thought she would leave us. She survived so many health challenges over the years even when the odds were against her. And, yet through it all, she was our sassy matriarch who led us with dignity,... View Obituary & Service Information

The family of Guadalupe N. Morales created this Life Tributes page to make it easy to share your memories.

Guadalupe had more than nine lives and we never thought she would...