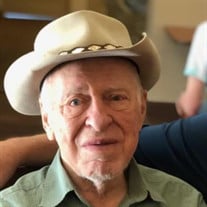 A private family graveside service will be held at Rose Hill Cemetery in Tyler for George Hansel Crank, 88, of Tyler, with Gary Murray officiating under the direction of Stewart Family Funeral Home. Mr. Crank passed away Monday, January 25, 2021 in Tyler. He was born February 29, 1932 in Lewisville, Arkansas to Roy and Arlene Mitchell Crank. Hansel was a member of Green Acres Baptist Church for 40 years. He was an Army veteran. He had several accomplishments while working 50 years in the oil and gas business. He spent several months in Alaska working for Occidental Petroleum as an Oil Scout. Later he opened an office in Tyler working as a Petroleum Landman. He was also the President of the East Texas Association for Petroleum Landmen from 1980-1981. Hansel was awarded the Brantley Jackson Memorial Award as “Landman of the Year – 1987” and he was presented the Pioneer Award in 2013 from the East Texas Association of Petroleum Landmen. Hansel enjoyed the outdoors, everything from coaching football and baseball to fishing and hunting. He had a passion for quail hunting and had several bird dogs, which he trained himself. Later in life he loved to travel with a close group of friends that called themselves “The Gang”. There were lots of trips, several all over the world. Hansel was preceded in death by his parents; his loving wife of 53 years, Margaret Heaberlin Crank; and brother, Bobby Crank. He is survived by his family including sons, Steven Crank and wife Susan of Whitehouse and Kevin Crank and wife Linda of Sachse; grandchildren, Ashley Bleam and husband Parker, Callie Crispin, Jennifer Johnson and husband Eric, and Michael Crank; two great-grandchildren, Texas and Lila; and sisters, Linda Jackson and husband John of Springhill, Louisiana and Sandra Taylor of Tyler; and many nieces and nephews. If desired, memorials may be made in honor of Hansel Crank to Alzheimer’s Alliance of Smith County, 211 Winchester Dr., Tyler, TX or The Hospice of East Texas Foundation, 4111 University Blvd. Tyler, TX 75701.

A private family graveside service will be held at Rose Hill...

Send flowers to the Crank family.