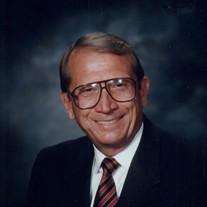 Mr. Harold Clay Beaird, 91, of Tyler, passed away Wednesday, April 26, 2022. Harold was born September 1, 1930 in Tyler to Bennie E. Beaird and Lera Kathleen Thedford Beaird. Harold graduated from Tyler High School in 1947. He attended Tyler Junior College on a band scholarship and assisted in the formation of the first TJC Band in 1947. He graduated from TJC in 1949 and continued on to Texas A&M University where he graduated with a degree in Petroleum Geology in 1952. He couldn’t have been more proud than when his son, David(’81), granddaughter, Becca(’12) and her husband, Landon(’10) got their Aggie rings! From 1952 -1971 he worked for Lone Star Gas, eventually resigning as the Manager of Exploration to begin his own business as an independent petroleum geologist. He placed an emphasis on the East Texas area. He has been a member of American Association of Petroleum Geologists since 1958. His love for TJC continued throughout his life. Harold and his wife, Rosemary, have given 16 endowed scholarships to TJC and so far 174 students have benefitted from these scholarships. He served as a TJC trustee for 14 years and TJC Foundation board member for 13 years. In addition, they have given 2 scholarships to UT Tyler and 1 to Texas A&M. He enjoyed community and charitable work throughout his life, serving on many boards and foundations. Among them are TJC Board of Trustees, East Texas Medical Center Board, East Texas Geological Society, Tyler Area Chamber of Commerce, Goodwill Industries, Tyler Economic Development Council, Tyler Petroleum Club, Willow Brook Country Club, Salvation Army, Peoples National Bank, Fair Foundation, TJC Foundation, Texas Chest Foundation, East Texas State Fair, Bethesda Clinic Advisory Board, ETMC Foundation, and the UT Tyler Development Board. In addition, He is a past president of the TJC Board of Trustees, ETMC Board, East Texas Geological Society, Tyler Area Chamber of Commerce, Petroleum Data Library, and East Texas Fair. A longtime member of First Presbyterian Church, he served as an elder and trustee. Harold received the 2004 TJC College Alumni Public Service Award, 2008 recipient of the T.B. Butler Outstanding Citizen Award, Boy Scouts of America Good Turn Award in 2009, the Gertrude Windsor Award from PATH in 2016 and Outstanding Philanthropist award in 2017. He had a great love for life and was forever seeking new challenges. Beaird Farm was one of his favorite projects. Through the years he raised horses, cattle and coastal. Best of all was when family and friends gathered at the farm. Fishing there was a special joy. He passed his love of Texas A&M to his family with 5 family members attending school there. Aggie football was a favorite pastime. He remained active after retirement, enjoying world travels, boating in the Gulf, and his men’s group Bible study. Survivors include wife, Rosemary; son, Dr. David Beaird(Lisa); grandchildren, Robert Beaird(Afton), Rebecca Hagan(Landon), and Madison Beaird. He has a great-granddaughter, Quinn Hagan. Stepchildren are Kurt Brown(Rhonda) and Lori Brown; step-grandchildren, Brandon Honeycutt, Leigh Brasuel(Will), and Heather Scullawl. Preceded in death by his brother and lifelong best friend, Ben Beaird of La Grange Park, IL, and daughter, Beverly Beaird of Tyler. The Beaird family would like to thank Harold’s special caregivers; Yanira, Greg, Douglas, and Angela. Special thanks to the staff of Hospice of East Texas for the extraordinary care and compassion over the last year of his life. Honorary pallbearers will be his many good friends both living and those that have gone before him. Celebration of Life Services will be held Monday, May 2, 2022 at 2:00 p.m. at First Presbyterian Church in Tyler. Dr. Stuart Baskin and John P. Carr will officiate. Reception will follow the service. If desired, memorials may be made to The Hospice of East Texas (www.hospiceofeasttexas.org) 4111 University Blvd., Tyler, TX 75701; PATH (www.pathhelps.org) 402 W. Front St., Tyler, TX 75702; First Presbyterian Church (www.fpctyler.com) 230 W. Rusk St., Tyler, TX 75701; or the charity of your choice.

The family of Harold Clay Beaird created this Life Tributes page to make it easy to share your memories.

Send flowers to the Beaird family.