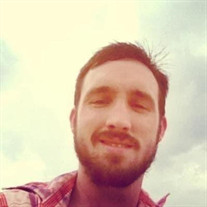 Services for Heath Davis Redfern, 32, of Tyler will be held on Sunday, October 4, 2020 at 2:00 p.m. at the Stewart Family Funeral Home Chapel with Mason Cheatham and Kevin Burdette officiating. A visitation is scheduled for Saturday, October 3, 2020 from 5:00-7:00 p.m. A private burial will be held at a future date.   Mr. Redfern passed away Friday, September 25, 2020 in Tyler. He was born June 2, 1988 in Tyler to John Redfern and Kimberly White Redfern, and was a most loved brother and best friend to Clinton Redfern and Karina Redfern.   Heath graduated from Robert E. Lee High School in 2006, where he played on the soccer team and played trumpet in the marching band. He attended Tyler Junior College, where he was an Apache Belle Guard. On July 12, 2008 he married Deborah (Debbie) Leann Ham. Heath was a member of the United States Air Force. He spent the majority of his Air Force career stationed in Okinawa, Japan, where his first daughter, Brooklyn Elise, was born. In 2009, while in Japan, Heath was deployed to serve our country in Iraq during Operation Iraqi Freedom. After completing his military service, he and his family returned to Texas, where he began his management career at the family’s business, Tyler Products Sales. With his father mentoring him along the way, he worked his way up from plant hand, to a CDL driver, and finally to the scheduling manager. In 2015, Heath & Debbie welcomed their second daughter, Marguerite (Maggie) June. Those who knew Heath, will miss seeing him walking his girls into Green Acres Baptist Church, where he was a member.   Heath was preceded in death by his paternal grandparents, Harley and Marguerite Redfern; his maternal grandmother, Rebecca Ann White; and his uncle, Harley Jr. Redfern. He is survived by his wife, Deborah Ham Redfern and their two daughters, Brooklyn and Maggie; his parents, John and Kim Redfern of Tyler; siblings, Clinton Redfern of Austin and Karina Redfern, currently of Birmingham, Alabama; maternal grandparents, Lynn and Murl White of Tyler; in-laws, J.D. and Sherri Ham of Fort Worth; and sister-in-law, Jonna (Brandon) Ham of Tyler.   Honorary Pallbearers will be Clinton Redfern, Luke Casey, Aaron Tavenner, Josh Tavenner, Kyle Breaux, Graeme Wyatt, Mason Cheatham, Luke Swanson, and Donovan Stuprich.   If desired, memorials may be made to the Wounded Warrior Project at https://support.woundedwarriorproject.org/ .

Services for Heath Davis Redfern, 32, of Tyler will be held on Sunday, October 4, 2020 at 2:00 p.m. at the Stewart Family Funeral Home Chapel with Mason Cheatham and Kevin Burdette officiating. A visitation is scheduled for Saturday, October... View Obituary & Service Information

The family of Heath Davis Redfern created this Life Tributes page to make it easy to share your memories.

Services for Heath Davis Redfern, 32, of Tyler will be held on...