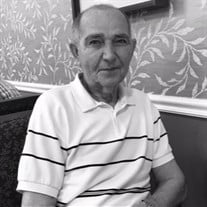 Mr. Helmut Rosin, 86, of Greeley, Colorado and most recently, Tyler, Texas, passed away at Christus Mother Francis Hospital in Tyler. Mr. Rosin is survived by his loving wife, Helene Rosin; his daughter, Kathleen Rosin Slaughter and husband, Mark Slaughter; his grandchildren, Emma Shewmake Liles and husband, Hunter Liles, Andrew Shewmake, and Ivie Slaughter Brown and husband, Dustin Brown; and his great grandsons, Sidney, Baine, Bailon and Wylie. Helmut was born on January 1, 1936 in Kulczyn, Poland and lived in Germany until he and his family immigrated through Ellis Island to Greeley in 1952 by way of a sponsorship through Our Saviors Lutheran Church. He met and married his "sweetheart", Helene, in 1959, and together made Greeley their home until dementia and Alzheimer's made it necessary to move them to Tyler to be cared for by their daughter and family in 2018. Helmut devoted his life, first and foremost, to his Lord and Savior. He always put his wife before himself and lovingly cared for her to the best of his ability until his dying day. They were inseparable, and one would rarely see them one with the other. He was loved and admired by family and friends alike and will be truly missed by all. A memorial service will be held in Greeley, Colorado on a future undetermined date.

The family of Helmut Rosin created this Life Tributes page to make it easy to share your memories.

Mr. Helmut Rosin, 86, of Greeley, Colorado and most recently,...

Send flowers to the Rosin family.