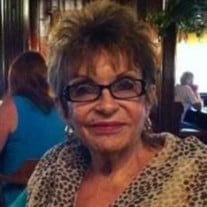 A Celebration of Life for Hilda “Toni” Dojcsak Alvarado, 93, of Tyler will be held on Tuesday, June 14, 2022 at 2:00 p.m. at Stewart Family Funeral Home Chapel. Toni passed away Saturday, June 11, 2022 in Tyler. She was born November 18, 1928 in Dallas to Karl Johnson and Brigida Alamo Johnson. The 2nd of 8 children. Her parents met doing missionary work in 1920. She held a variety of jobs during her life. She loved working at the Majestic Theater in Dallas when she was 14-year-old as an Usher. She also had a lot of fun stories to tell of her days being an Operator in the 1940’s and listening in on calls for her friends to see what their boyfriends were up to. At age 18, she married Ken Kinnamon and they had 3 daughters and 1 son. Debbie and Ricky were born in Dallas and they later moved to California in mid-1950’s and had Vicki & Sandy. She married Esteban “Steve” Alvardo in 1992 and later moved to Tyler. She was a nanny for several Tyler families, as she loved caring for young children and her husband Steve is known for doing Upholstery for many families in Tyler. They both have enjoyed their friends and relationships in the Tyler community. Toni was preceded in death by her son, Ricky Kinnamon, her sister, Rita Blythe, brothers, Karl Johnson, Jr, brother, Floyd Johnson, and parents, Karl O. and Brigida Alamo Johnson. She is survived by her loving family including husband, Steve Alvarado of Tyler. 4 Siblings: Elizabeth Miles, David, Sam and Victor Johnson. 3 Daughters: Debbie Jackson & husband, Lynn Jackson of Commerce, TX; Vicki Clark & husband, John Clark of North Richland Hills, TX; Sandy Stewart & husband, Mack Stewart of Tyler, TX. 7 Grandchildren: Mark Jackson, Kim Thompson, Dustin Stewart, Blake Jackson, Mark “Nemo” Stewart, Spencer Shepherd, and Lauralee Stewart. 8 Great-Grandchildren: Garrett Jackson, Brenna Kay Jackson, Carter Thompson, Davis Thompson, Wells Thompson, Gavin Fort Stewart, Brady Jackson, and Gracie Jackson.

The family of Hilda "Toni" Dojcsak Alvarado created this Life Tributes page to make it easy to share your memories.

A Celebration of Life for Hilda “Toni” Dojcsak Alvarado, 93,...