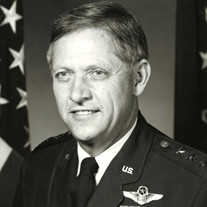 A private Mass will be held for Lieutenant General Howard M. Fish, 96, of Tyler, Texas, at St. Mary Magdalene Catholic Church, Flint, Texas with The Rev. James Rowland officiating. A private burial will be held at Northwest Louisiana Veterans Cemetery, Keithville, Louisiana under the direction of Stewart Family Funeral Home. General Fish was the Assistant Vice Chief of Staff of the United States Air Force and the Assistant for Readiness and North Atlantic Treaty Organization (NATO) Matters. In addition, he served as the Senior Air Force Member, Military Staff Committee, United Nations. General Fish passed away April 30, 2020 in Tyler and was born in Melrose, Minnesota, on August 1, 1923, to Nathaniel and Louise Gaetz Fish. He graduated from St. Cloud Cathedral High School, St. Cloud, Minnesota, in June 1941. He entered the Army Air Forces in 1942 and served as an aerial gunner at Tyndall Field, Florida. He began advanced navigator training at Monroe, Louisiana, in November 1943, and received his navigator rating and commission as a second lieutenant in the Army Air Corps in July 1944. During World War II, from October 1944, General Fish served as a navigator in the European theater of operations on a B-17 aircraft crew with the 419th Bombardment Squadron, 301st Bombardment Group in Italy. He was shot down over Vienna, Austria, in February 1945, and spent the remainder of the war as a prisoner of war in Germany. General Fish attended a student navigator refresher course at Ellington Field, Texas, and at Fairfield-Suisun Field, California, from November 1945 to February 1946. He then was assigned as assistant statistical control officer, Chanute Field, Illinois. In April 1946 he was transferred to Orlando, Florida, for statistical control indoctrination training. General Fish returned to Germany in July 1946 and served as a statistical control officer at Tempelhof and Wiesbaden Air Bases. He also flew in the Berlin Airlift. He returned to the United States in July 1949 and trained as a navigator-bombardier at Mather Air Force Base, California. In April 1950 he was assigned to the 84th Bombardment Squadron at Langley Air Force Base, Virginia. In July 1950, during the Korean War, he was transferred to the 162d Tactical Reconnaissance Squadron, which was immediately sent to Korea, where he flew 63 combat missions. General Fish later served as a navigator with the air crew of the Commanding General, Eighth Army, in Korea. In March 1951 he was assigned as Chief, Program Analysis Section, 374th Troop Carrier Wing, Far Eastern Air Forces. He returned to Langley Air Force Base in June 1951, to train replacement combat crews for B-26 aircraft units in Korea. Initially, he served as a squadron navigator in the 4400th Combat Crew Training Group and later as a squadron executive officer and group director of operations and training. In January 1954 General Fish entered the Air Command and Staff College, Maxwell Air Force Base, Alabama. Upon graduation, he returned to Langley Air Force Base as executive officer for the 405th Fighter-Bomber Wing. In June 1956 he entered the University of Chicago and graduated in August 1957 with a master’s degree in business administration. He became a member of the business scholarship fraternity, Beta Gamma Sigma. General Fish was transferred to Europe in October 1957, serving first as Comptroller for the 60th Troop Carrier Wing at Dreux Air Base, France, and then as Comptroller, 7310th Air Base Wing, Rhein-Main Air Base, Germany. In July 1960 he entered the Armed Forces Staff College at Norfolk, Virginia. After graduation in December 1960, he was assigned as Director of Data Automation, and later became Assistant Deputy Chief of Staff, Comptroller, Headquarters Eastern Transport Air Force, McGuire Air Force Base, New Jersey. In August 1963 he entered the Air War College, Maxwell Air Force Base, Alabama, and while there received a master’s degree in international affairs from The George Washington University. In July 1964 he was assigned as a plans and programs officer in the Directorate of Plans, Headquarters U.S. Air Force, Washington D.C. He was named Assistant for Analysis to the Deputy Director of Plans for Force Development in December 1967. In March 1969 he became Director of Tactical Analysis, Seventh Air Force, Tan Son Nhut Air Base, Republic of Vietnam. General Fish returned to Headquarters U.S. Air Force in July 1970 as the Deputy Director of Doctrine, Concepts and Objectives, Deputy Chief of Staff, Plans and Operations. He was appointed Deputy Director of the Budget, Office of the Comptroller, in February 1971 and became Director of the Budget in October 1973. In August 1974 General Fish became Director, Defense Security Assistance Agency, and Deputy Assistant Secretary of Defense (International Security Affairs) for Security Assistance. General Fish assumed the duties of Assistant Vice Chief of Staff of the United States Air Force on March 1, 1978. On May 1, 1978, he was assigned additional duties as Assistant for Readiness and North Atlantic Treaty (NATO) Matters, and as Senior Air Force Member, Military Staff Committee, United Nations. His military decorations and awards include the Defense Distinguished Service Medal with one oak leaf cluster, Legion of Merit with one oak leaf cluster, Distinguished Flying Cross with one oak leaf cluster, Air Medal with four oak leaf clusters, Air Force Commendation Medal, and Purple Heart. He held a master navigator rating. He was promoted to the grade of lieutenant general on October 4, 1974, with date of rank October 3, 1974. General Fish was preceded in death by his parents; his wife, Jamie; and infant daughter, Allison; sisters, Helen Hardin, Mary Lou Kammler and Dorothy Murtha; brothers, George Fish and Nathaniel Fish. He is survived by his son, Howard Math, Jr. and wife Gloria; sisters, Natalie Rosen and Harriet Wall; brother, Nat Fish; and many nieces and nephews. In lieu of flowers, donations may be made to the charity of your choice.

The family of Gen. Howard M. Fish created this Life Tributes page to make it easy to share your memories.

A private Mass will be held for Lieutenant General Howard M....