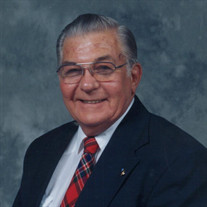 Howard M. McFarland, loving husband, father, grandfather and friend, left his earthly home for his eternal home with his Lord and Savior Jesus Christ on March 20, 2021. Mr. McFarland, of Flint, was 88 years old. A lifelong East Texan, Howard was born in Tyler on June 18, 1932 to Roy D. McFarland and Artie Phillips McFarland. He graduated from Tyler High School in 1949, attended Tyler Junior College, and received his Bachelor’s Degree from East Texas State College – now Texas A&M University-Commerce. Howard married the former Mary Woodward, his loving wife of 67 years, shortly after returning home from Infantry School at Fort Benning, Ga., in 1954. They met in 1953 in Tyler at Loggins Restaurant, which is still open today. He proudly served his country in the Army National Guard, where he became a First Lieutenant, and later earned the rank of Captain in the Army National Guard Reserves. He worked for Tyler Independent School District for 28 years, retiring as the district’s Director of Transportation in 1994. Howard was a man of unwavering faith, kindness and humility. He was a member of Flint Baptist Church, where he served for many years as a deacon. He was a 60-year member of St. John’s Lodge No. 53 in Tyler, where he faithfully served in many positions over six decades. A Master Mason, he served as Past High Priest of the Chapter, Past Sovereign of the Red Cross of Constantine, Past Commander of Ascension Commandery, Past Presiding over all the York Rite Bodies, and the District Deputy for the Grand Lodge of Texas. In 2008 he was given The Golden Trowel Award, the highest honor a Mason can receive. Howard was preceded in death by his parents, Roy and Artie McFarland; his sister, Willie Tapscott; and his grandson, Chantry Colston. He is survived by his wife, Mary, of Flint; sister, Carolyn Benson, and her husband, Jim, of Tyler; son, Clay McFarland, of Holly Lake Ranch; daughter, Vicki Colston, of Big Sandy; son, Scott McFarland, of Flint; grandson, Chase Colston, and his fiancé, Maureen Loosen, of Tyler; granddaughter, Brittaney McFarland of Lindale; and grandson, Casey McFarland, of Lindale. Services for Mr. McFarland will be held on Wednesday, March 24, at 2:30 p.m. at Stewart Family Funeral Home with Rev. Sam DeVille and Rev. Park Robertson officiating. Burial will follow at Flint Cemetery in Flint under the direction of Stewart Family Funeral Home. Visitation is scheduled from 1:30-2:30 p.m. on Wednesday, March 24, at Stewart Family Funeral Home, 7525 Old Jacksonville Highway in Tyler. Pallbearers will be Clay McFarland, Scott McFarland, Chase Colston, Casey McFarland, Dennis Black and Richard Gaiser.

The family of Howard M. McFarland created this Life Tributes page to make it easy to share your memories.

Send flowers to the McFarland family.