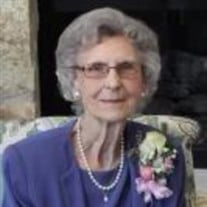 On July 8, 2021, Inez Snider went peacefully home to her Lord and Savior. She was born July 17,1922 in Starrville, Texas to Willie and Mary Lou McNutt. She graduated from Gladewater High School and worked as a bookkeeper before becoming a fulltime homemaker. She met and fell in love with the love of her life of seventy-two wonderful years, Ray Snider. They were married on July 17,1945 in Edmonton, Alberta, Canada, where he was serving during WWII. They returned to Texas where they have lived and raised their children. Following Ray's retirement, they enjoyed taking cruises, traveling overseas and traveling throughout the US in their motor home. Inez was an active member of First Baptist Church for over fifty years where she served in many ministries including Mothers Day Out program, recreation center, church library, multiple committees, and Women’s Missionary Union (WMU). She was a member of the ABC Quilting group for over thirty years sewing quilts for Aids and premature babies. She and Ray were still serving Meals on Wheels to the elderly at the age of eighty-eight. They made many mission trips to both sides of the border building and repairing churches. They had a long time commitment to the Hawaii Baptist Academy. She was a prayer warrior, encourager and mentor to family and friends throughout her life. She truly exemplified a servant’s heart. She enjoyed cooking, sewing, quilting, gardening, reading and playing 42. The joy of her life was being Memaw to her grandchildren and great-grandchildren, always having chocolate and coconut pie, her special waffles and chicken spaghetti. Inez was preceded in death by her parents, Willie and Mary Lou McNutt, husband, Aron Ray Snider, five brothers, a sister and her granddaughter-in-law, Natalie Reed Brown. Left to cherish her memory are her daughters, Jeanetta Brown and husband Alan of Tyler and Melissa Stockholm and husband Kurt of Denton; grandchildren, Kevin Brown and wife Aidan Mckean Brown of Melissa; Courtney Womble and husband Blake of Prosper; Collin Brown of The Colony; Kristen Stockholm Garwood and husband Clay of Huntersville, North Carolina; and Kaitlyn Stockholm of Denton; great-grandchildren, Madelyn Brown, Gracie Mckean and Halle Mckean; Cooper, Preston and Blaire Womble; and Peyton and Mason Brown. The family would like to thank her caregivers, Sherry Mosley and Tina Ward for their loving care of Inez the last couple of years. Also, a special thanks to the entire staff at Hospice of East Texas for their compassion, comfort and support during her final days. A service of celebration will be held at Stewart Family Funeral Home on Monday, July 12th at 11:00 am with Reverends Pike Wisner and Scott Richardson officiating. Visitation is Sunday, July 11th from 4-6 pm at Stewart Family Funeral Home. If desired, memorials may be made to the Together We Worship fund at First Baptist Church of Tyler or the Hawaii Baptist Academy, 420 Wyllie Street, Honolulu, Hawaii 96817.

On July 8, 2021, Inez Snider went peacefully home to her Lord and Savior. She was born July 17,1922 in Starrville, Texas to Willie and Mary Lou McNutt. She graduated from Gladewater High School and worked as a bookkeeper before becoming a fulltime... View Obituary & Service Information

The family of Inez McNutt Snider created this Life Tributes page to make it easy to share your memories.

Send flowers to the Snider family.