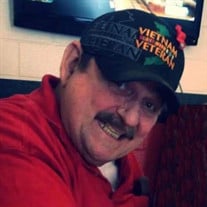 Memorial services for Jack William Ebbs, 72, of Flint will be held on Friday, October 8, 2021, at 2:00pm at Stewart Family Funeral Home with Pastor Sam DeVille officiating. Jack passed away on September 7, 2021 in Tyler, Texas. He was born on November 26, 1948 to James and Alice Ebbs in San Diego, California. He was the second oldest of four children and grew up in various locations around the world due to his father serving in the Navy. Jack graduated from Beaufort High School in Beaufort, South Carolina where he was a valued member of their golf team. He remained an avid golfer throughout his life. After his graduation he joined the Army, where he proudly served his country in various locations including Vietnam. During his tour in Vietnam he was awarded both the Army Commendation Medal and the Bronze Star for meritorious service exhibited during combat. Jack’s greatest joy in life was his family and being a papa to his grandchildren. He also was an avid reader, loved animals, and enjoyed eating all kinds of foods. One of our favorite things about Jack was his contagious laugh, which he shared often, and his big heart. We are sure that laugh is now ringing throughout Heaven. Jack was preceded in death by his parents, James and Alice Ebbs, and sister, Karen Ebbs. He is survived by his wife of 37 years, Sandra Ebbs, and his loving family including daughter, Alicia Ebbs; daughter, Kacey Brunner and her three children, Kamden, Blaine, and Kimberlynn; daughter, Brandi Ebbs; and son, Franklin Harper and wife Jenna, with their three children Aubrey, Reagan, and Grace; sister, Christine Kumiski; and brother, Robert Ebbs and his wife Olga. He is also survived by numerous nieces, nephews, and their families.

Memorial services for Jack William Ebbs, 72, of Flint will be held on Friday, October 8, 2021, at 2:00pm at Stewart Family Funeral Home with Pastor Sam DeVille officiating. Jack passed away on September 7, 2021 in Tyler, Texas. He was born... View Obituary & Service Information

The family of Jack William Ebbs created this Life Tributes page to make it easy to share your memories.

Memorial services for Jack William Ebbs, 72, of Flint will be...

Send flowers to the Ebbs family.