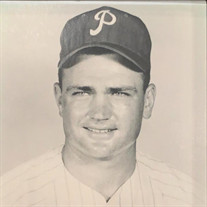 Graveside services for Jackie Sylvester Davis 85, of Tyler will be held on Thursday, June 3, 2021 at 10:00 a.m. at Restland Memorial Park Cemetery in Carthage with Rev. Pike Wisner and Rev. Charles Dodson officiating under the direction of Stewart Family Funeral Home. Mr. Davis passed away Sunday, May 30, 2021in Tyler. He was born March 5, 1936 in Panola County to Leon Davis and Percy Butler Davis. Jackie was a member of First Baptist Church Tyler. And when living in Carthage, a member of First Baptist Church as well. He attended Baylor University in Waco, Texas on a baseball scholarship and received a Master’s Degree from Stephen F. Austin University. He was a retired baseball coach from Carthage High School and Athletic Director/Coach for Panola College. He also played professional ball for the Philadelphia Phillies. Jackie was preceded in death by his father, Leon Davis; mother, Percy Davis; brother, Billy Joe Davis; sister, Aliene Sheffield; and son, Jacke Davis. He is survived by wife, Barbara Davis; sons, Jeff Davis and J.P. Davis; daughter-in-law, Kishla Davis; and grandsons, Rex Davis and Ty Davis. He was honored with numerous awards and recognition throughout his career, from 8 times being named Coach of the Year to Panola College and Carthage High School Hall of Fame. But if you asked him, he would say his major accomplishment as a coach was being a friend to aspiring players including 38 drafted into the majors and 118 players signing with universities. Jackie was an avid competitor and loved playing sports. He was an All-Star athlete from the get go. His philosophy was to play as hard as you can, give it all you got, play by the rules, and win or lose be friends with those you compete against. Outside of the sport of baseball, he was passionate about golf. And luckily got the opportunity to play a few rounds from time to time. He not only played a lot; he won a lot as well. If there is a golf course in heaven, he probably has a tee time by now. As good as an athlete as he was, and as much as he loved sports, he cherished his friends and family. He loved to tell a joke or two and had the best sense of humor around. He also had the biggest heart of any man and was always putting others first. He had a strong, loving faith in God that carried him through the many trials of life, including the loss of his eldest son, Jacke Daniel Davis, who I am sure are enjoying being reunited once again for the first time in many years. He believed in the power of prayer and devoted himself to the Christian faith. He loved God. He also loved life to the fullest. He loved his family so dearly and so wanted them to know how much. He loved his golf. He also loved a grape popsicle on a regular basis. He was a man you could count on to be on your side. All those who knew him can testify to that fact. And although he lived 85 full and grand years on the earth, he still will be sorely missed by everyone who knew him. He was kind, generous, loving, strong, friendly and a passionate man who will be truly missed, at least until we are all reunited again one day. Visitation is scheduled from 5:00-7:00 p.m. on Wednesday, June 2, 2021 at Stewart Family Funeral Home, 7525 Old Jacksonville Highway in Tyler.

Graveside services for Jackie Sylvester Davis 85, of Tyler will be held on Thursday, June 3, 2021 at 10:00 a.m. at Restland Memorial Park Cemetery in Carthage with Rev. Pike Wisner and Rev. Charles Dodson officiating under the direction of Stewart... View Obituary & Service Information

The family of Jackie S. Davis created this Life Tributes page to make it easy to share your memories.

Graveside services for Jackie Sylvester Davis 85, of Tyler will...

Send flowers to the Davis family.