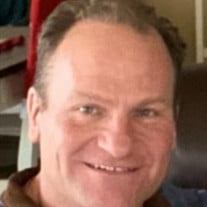 James Andrew “Andy” Bellamy was born at Fort Campbell, Kentucky, to Howard D. and Betty Jones Bellamy on June 1, 1970, and unexpectedly entered Heaven on the morning of February 15, 2022. Andy, the youngest of three, excelled in athletics and academics all his school years. After graduating Leesville (LA) High School, he attended Northeast Louisiana University – now the University of Louisiana, Monroe – on a football scholarship. There, he never missed a start, earned two conference rings and all-academic and team honors, and graduated with a Business degree. It was at Northeast that a special young lady caught Andy’s eye – Kristi Le-Anne Blaylock. After their graduation in December of 1992, they married on June 11, 1993. With the arrival of Ashton in 1997 and Andrew in 1999, the family was complete. Or so they thought until the addition of Lilli, a Maltese mutt, in 2009. Finding his niche in sales, Andy worked for Building Plastics Inc., for twenty-two years and enjoyed connecting with his coworkers and customers, many of whom became close friends. Andy was predeceased by father, Retired First Sergeant Howard D. Bellamy of Anacoco, LA; brother-in-law, Retired Lieutenant Colonel James A. Beinkemper of Anacoco, LA; and father-in-law, Norvel Blaylock of Bossier City, LA. Left to cherish his memory are wife, Kristi of Tyler; mother, Betty Bellamy of Anacoco, LA; daughter, Ashton Bellamy of Birmingham, AL; son Andrew Bellamy of Waco, TX; sister, Betty Beinkemper of Anacoco, LA; brother, Retired Chief Master Sergeant Howard “Doug” Bellamy of Nashville, GA; mother-in-law, Barbara Blaylock of Bossier City, LA; brother-in-law, Kris Blaylock and sister-in-law, Mindy Blaylock of Benton, LA; and a host of nieces, nephews, aunts and uncles. Andy loved God, family, and friends, and will be missed very much. There will be a Celebration of Life service honoring Andy on Friday, February 18, 2022, at South Springs Baptist Church. Visitation will begin at 9:00 A.M., with the memorial service following at 10:00 A.M. In lieu of flowers, donations can be made to the Wounded Warrior Project (www.woundedwarriorproject.org) or Project Valhalla (www.tilvalhallaproject.com). John 14:1-3 NIV.

James Andrew &#8220;Andy&#8221; Bellamy was born at Fort Campbell, Kentucky, to Howard D. and Betty Jones Bellamy on June 1, 1970, and unexpectedly entered Heaven on the morning of February 15, 2022. Andy, the youngest of three, excelled in... View Obituary & Service Information

The family of James Andrew "Andy" Bellamy created this Life Tributes page to make it easy to share your memories.

Send flowers to the Bellamy family.