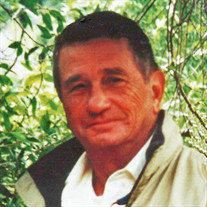 James Finis Deakins finished his earthly life and began Life Eternal on Father’s Day, June 20, 2021. He died as he lived, with dignity and grace, and he rests in the arms of his Heavenly Father. A memorial service will be held on Saturday, June 26, 2021 at 11:00 a.m. at Christ Episcopal Church in Tyler. Jim was born in Longview, Texas on August 21, 1933 to Kathryn and Homer Deakins. He graduated from Schreiner Military Academy and Oklahoma State University, where he was a member of Beta Theta Pi fraternity. Jim was also a graduate of the Southwestern School of Banking at SMU. In 1957, he married Sue Harding – a marriage that lasted 63 years. Their first home was in Ft. Smith, Arkansas, where Jim served as a captain in the United States Army. The Deakins returned to Longview, where Jim began his banking career. It was in Longview that they welcomed their beloved children, Paula and Scott. In 1969, Jim accepted a job at Citizens Bank and his family began a wonderful new adventure. Jim loved Tyler and immediately became involved in his new community. He served on many civic boards, and in 1983 was President of the Texas Rose Festival. He was an active member of Christ Episcopal Church. In 1983, Jim joined Southside Bank, under the leadership of his good friend Bill Hartley. After 30 fulfilling years, he retired from Southside at the age of 80. Jim was an avid fisherman-happiest with a rod in his hand and a bass on the line. His fishing trips with Tommy and Rob brought him great joy! He played golf all of his life and made two holes-in-one. The bright star in his golfing career was a trip to Ireland with his brother and best friend Homer. Sue and Jim enjoyed many trips with their family and friends-summer trips to Carmel with Sally and Dick Davis, fly fishing in Colorado with the Lakes, fifteen years at the Wards’ ranch in Blanconia, and wonderful trips to the beach with their family. Jim was truly a gentle man; his congeniality, thoughtfulness, and rock-solid integrity attracted numerous friends of all ages. We are very grateful for the angels disguised as friends and neighbors who made these last months more blessing than burden. A special thanks to Jim’s caregiver, Lilly Harmon, Hospice of East Texas-especially Lenora, Deborah, and Dennis. Jim was preceded in death by his cherished sister, Yyvonne Deakins Collins. Jim is survived by his wife, Sue; son, Scott; and daughter, Paula and husband Kyle Molberg; his precious grandchildren, Jenny, Hayden, Jamey and Wes Bullard; and great-grandson, Freddie. He is also survived by his dear brother, Homer and family. Pallbearers will be Peter Boyd, Rob Caton, Mike Coker, Dick Davis, Eddie Duncan, Don Garrett, Guy Griffith, Raymond Hedge, Chico Holland, Peyton Lake, Clay McCain, Josh McElroy, Bill Stites, Chris Simons, Andrew Swann, Todd Swann and Bernie Ward.

James Finis Deakins finished his earthly life and began Life Eternal on Father&#8217;s Day, June 20, 2021. He died as he lived, with dignity and grace, and he rests in the arms of his Heavenly Father. A memorial service will be held on Saturday,... View Obituary & Service Information

The family of James Finis Deakins created this Life Tributes page to make it easy to share your memories.

Send flowers to the Deakins family.