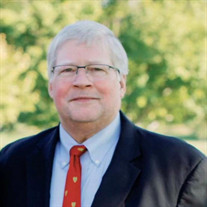 James Andrew Hensarling passed away peacefully, surrounded by his family on April 22, 2022. Born December 2, 1954, in Bryan, Texas, he was preceded in death by his father, Charles Andrew Hensarling. James grew up in College Station and graduated from A&M Consolidated High School in 1973 where he was an all-district football player and an Eagle Scout. He was accepted into Texas A&M where he was a 3rd generation graduate of the Corps of Cadets and a proud member of Company B-2. Following graduation, he enlisted and served three years in the United States Army where he achieved the rank of First Lieutenant. Upon completion of his service to the country, James was accepted into the Baylor University School of Law. He graduated with his Juris Doctorate in 1984. In that same year, he met and fell in love with Lee Hooper. They were married in 1985 and shortly after moved to Edna, Texas where James was the District Attorney in Jackson County. In 1987, James and Lee moved to Austin where they raised their two children, Lauren, born the following year, and Brock, born shortly after in 1989. James spent the next twenty years working as an Assistant U.S. Attorney for the Western District of Texas. Any time he wasn’t working, James prioritized being with his family, his greatest source of pride and joy. His happiest memories were of the summers he spent in Grand Lake, Colorado, where he watched his children sail and enjoyed his many friends at the Grand Lake Yacht Club. In 2008, James and Lee moved to Tyler, Texas, where he spent eleven years as a Parole Commissioner for the Texas Board of Pardons and Paroles. James had a reputation for being intelligent and principled and was deeply respected by his colleagues. James was an avid learner and voracious reader who had a penchant for stopping at every historical marker he passed. He developed a passion for European football and loved cheering on the Tottenham Hotspurs. He was a man of great faith which was manifested in the way he raised his children, honored his wife, and lived his life both personally and professionally. He was kind, smart, honorable, selfless, and loving. His warmth and the way he made people feel around him was unparalleled, and it was evidenced in the innumerable friendships he created over his life. He was loved, cherished, and admired by his family and thrived over the past three years in his role as “Papa Bear” to his four grandchildren. James is survived by his wife of 36 years, Lee Hensarling. James is also survived by his children and grandchildren: his daughter, Lauren Hensarling Huschka, her husband, Bryce Huschka, and their children, Maren and Milly; his son, Brock Hensarling, his wife, Arden Elliott Hensarling, and their children, Chase and Wells. In addition, James is survived by his mother, Ann Brock Hensarling, his brother, Jeb Hensarling, his wife, Melissa Fore Hensarling, and his sister, Carolyn Hensarling Arizpe, her husband Homer Arizpe; as well as nieces and nephews. A memorial service will be held at Christ Church Tyler, 118 South Bois d’Arc, Tyler, Texas on Wednesday, April 27th at 2:00 p.m. In lieu of flowers, memorial gifts in honor of James may be made to Christ Church Tyler Endowment Fund, christchurchtyler.org, or the Texas Aggie Corps of Cadets Association, 1134 Finfeather Road, Bryan, TX 77803, corpsofcadets.org/memory.com

James Andrew Hensarling passed away peacefully, surrounded by his family on April 22, 2022. Born December 2, 1954, in Bryan, Texas, he was preceded in death by his father, Charles Andrew Hensarling. James grew up in College Station and graduated... View Obituary & Service Information

The family of James Andrew Hensarling created this Life Tributes page to make it easy to share your memories.

Send flowers to the Hensarling family.