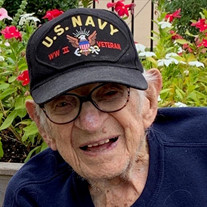 Rev. James “Jim” F. Humphries went to be with the Lord on Saturday, September 28, 2019 in Tyler. A celebration of his life will be held at Stewart Family Funeral Home in Tyler on Friday, October 4, 2019 at 10:00 a.m. with Rev. Pike Wisner and Rev. Stephen Akin officiating. Visitation will be held on Thursday, October 3, 2019 from 6:00 – 8:00 p.m. also at the Stewart Family Funeral Home. A private military burial will be held on Monday, October 7, 2019 at the Dallas-Ft. Worth National Cemetery. Jim Humphries was born March 9, 1926 in Savannah, Georgia, the son of James Madison Humphries and Anna Fagg Humphries. Jim came to know the Lord at the young age of 8 and was baptized on Sunday, August 5, 1934 at the Long Branch Baptist Church in Anderson, South Carolina. He graduated from Gaffney High School in Gaffney, SC in 1944 and immediately enlisted in the U.S. Navy. He served aboard the LST 807 in the Pacific theater of World War II. His tenure included battles at Iwo Jima and Okinawa. His Naval uniform is preserved and can be viewed at the American Freedom Museum in Bullard, Texas. Upon returning from the war, Jim enrolled at Furman University in Greenville, SC where he earned a Bachelor’s Degree. Upon graduation he began working for the Kellogg Corporation as a regional salesman in Lubbock, TX. It was in Lubbock where he met the love of his life, Mary Lou Lookingbill. After three short months of courtship, they married on Christmas Day, 1955 in Springdale, AR. A few years later, Jim felt the Lord’s call to Christian service, and enrolled at Southwestern Baptist Theological Seminary in Ft. Worth where he received a Master’s of Divinity degree. It was during this time that Jim and Mary pastored their first church, in Loco, OK. In 1966 they answered the call to missions and stepped out in faith and moved with their three young children (ages 8, 3 and 6 mos.) to Saigon, Vietnam where Jim became pastor of the Trinity Baptist Church and ministered to the U.S. military members. They served on the foreign mission field for seven years before returning home in 1973. Jim continued to take the message of Christ all over the world with World Evangelism Foundation until 1977, when Jim and Mary were called to pastor First Baptist Church, San Marcos, where they served faithfully for 13 years. During his early retirement years, Jim and Mary were blessed to serve as interim pastor at churches in New Braunfels, Corpus Christi, Odessa, Frankston and Canton, Texas. Each place they served, God provided them with lifetime friendships that brought much joy to Jim’s life. Jim never met a stranger, and his deep love for God and His people was felt by all who knew him. Jim is preceded in death by his father, James Madison Humphries and his mother Anna Fagg Humphries. Survivors include: his wife of 63 years, Mary Lou Lookingbill Humphries of Tyler; his children, Matt Humphries (Stella) of Tyler, Mark Humphries (Laurie) of Tyler and Tracy Humphries Miller (Ben) of Denton; his sister, Ellen Bracewell (Don); and his brother Tom Humphries. Jim is also survived by seven grandchildren: Landry Humphries (Jeanne), Madison Lasse (Jon), Luke Humphries, Timothy Humphries, Jonathan Humphries, Jessica Miller and Jenny Miller; as well as one beautiful great-granddaughter, Hazel Mae Lasse. In lieu of flowers, memorials may be made to Grace Baptist Church in Saigon, Vietnam (checks can be made payable to FBC, Tyler with a designation of Grace Baptist Church in the remitter).

The family of James F. Humphries created this Life Tributes page to make it easy to share your memories.

Rev. James “Jim” F. Humphries went to be with the Lord on Saturday,...

Send flowers to the Humphries family.