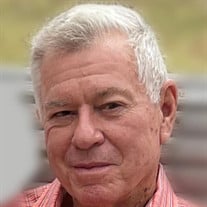 Graveside services for James “Jim” Robert Wilson, 78, of Whitehouse, will be held on Friday, January 21, 2022 at 2:00 p.m. at Walnut Grove Cemetery in Whitehouse with Rev. Sherman Mayfield officiating under the direction of Stewart Family Funeral Home. Mr. Wilson passed away Wednesday, January 12, 2022 in Tyler, TX. He was born August 17, 1943 in Riverside, California to William C. and Billie M. Wilson. The family moved to South Oak Cliff in Dallas where Jim attended school, played trumpet in the band, and graduated from South Oak Cliff High School in 1961. After high school, Jim enlisted in the Navy on January 31, 1962 and served on the USS Yancey as a Machinist Apprentice. After serving our country, he attended Henderson County Junior College, now known as Trinity Valley Community College. This is where he met his future wife of over 30 years, Nancy C. Embry. The two were married on June 4, 1966 at First Baptist Church in Dallas, Texas. After getting married, Jim continued his education at Stephen F. Austin State University where he earned his degree in Accounting. He was an accountant for Southwest Title Company in Dallas for several years and then later went to work for Amoco Oil Company as an office employee and as a field technician. He worked between both of their Tyler and Longview locations over the years. The office was not the place for him. He liked to be outside “getting his hands dirty” so most of those years were spent out in the field as a technician. He worked for Amoco until he took an early retirement to start his next endeavor, home building. He built homes for several years in the Whitehouse, Texas area until he completely retired. Jim and Nancy had two children together, Suzanne and Scott. Jim was a long-time member of First Baptist Church in Whitehouse, Texas. He served there as an RA (Royal Ambassador) leader and did volunteer work with the Baptist Men Association. Jim loved the Lord and one of his favorite past times until he passed was studying and reading his bible daily. On January 24, 2001 Jim married his second wife, Brenda Bounds. Brenda has two children, Renee and Wayne. Jim and Brenda have lived in Whitehouse for the past 20 years. They both enjoyed the outdoors, riding Jim’s Harley Davidson motorcycle and trips to Colorado and Alaska. Jim always kept himself busy with projects and helping others. He had a wealth of knowledge and manual skills. His talents and the love he showed his family will truly be missed. Jim was preceded in death by his parents, William C. and Billie M Wilson. He is survived by his loving family including his wife, Brenda Wilson of Whitehouse, Texas; brother, Bill Wilson and his wife, Amber of Leesburg, Florida; his children, Suzanne Tapley and her husband, Darren of Tyler, Texas, Scott Wilson and his wife, Tonya of Tyler, Texas, Wayne Bounds and his wife, Tania of Olalla, Washington, Renee Smalley of Ft. Collins, Colorado; his grandchildren, Ryan Tapley and his wife, Lindsey, Meghan Tapley, Ashlynn Tapley, Avery Tapley, Kyle Smalley, Adam Smalley; great-granddaughter, Jessie Ryan Tapley; and two great-grandsons, Zachary and Ethan Smalley. If desired, memorials may be made to St. Jude Children’s Hospital (www.stjude.org/donate) 501 St. Jude Place, Memphis, TN 38105.

Graveside services for James &#8220;Jim&#8221; Robert Wilson, 78, of Whitehouse, will be held on Friday, January 21, 2022 at 2:00 p.m. at Walnut Grove Cemetery in Whitehouse with Rev. Sherman Mayfield officiating under the direction of Stewart... View Obituary & Service Information