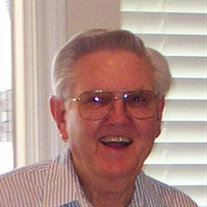 Services for James “David” Kelley, 92, of Tyler will be held on Saturday, August 28, 2021 at 2:00pm at Stewart Family Funeral Home with Kevin Burdett officiating. Visitation will begin at 1:00pm before the service. Burial will be at the Cathedral of the Pines Cemetery in Tyler. David was born December 16, 1928 in Oklahoma City, OK to Evart and Arvie Kelley. He passed away August 20, 2021 at Christus Trinity Mother Frances Hospital in Tyler following a chronic heart and lung condition. He grew up in Oklahoma City and graduated from Oklahoma A&M University. David married Peggy Jo Cochran on October 6, 1951 at The Baptist Temple in Oklahoma City. The couple lived in Oklahoma City and then Muskogee for a short while where their daughter Sherri was born. They returned to Oklahoma City where they owned a flower shop, and sons Steven and Robert were born. In 1957 the family moved to Weatherford where he began his career as a Soil Scientist with the Soil Conservation Service, USDA. His job took him to Brownwood, Waco, and Temple. After helping complete a number of County soil surveys as Area Soil Scientist, he relocated to the agency’s State Office and became part of a team developing watershed flood prevention projects all over Texas. He and Peggy retired and moved to Tyler in 1991. He was a seed merchandiser and traveled all around East Texas with Peggy for several years. They moved to their last residence in HollyCreek Village in 2001 where he was active in the Community Association for many years. David loved his family above all else. He was a devoted father, grandfather, and great-grandfather. He and Peggy were strong Christians and served faithfully in many Baptist Churches through the years. In recent years David started sitting out on his driveway with his dog Bella to enjoy the evening. Soon friends, neighbors, and their dogs all came by to visit. This event became known as “David’s Driveway Chats”. Everyone described him as a kind, gentle and loving friend, a true gentleman. David was preceded in death by parents, Evart and Arvie Kelley and 2 brothers. He is survived by his loving family including daughter, Sherri and husband Keith Matthews of Tyler; sons, Steven and wife Kathy Kelley of Georgetown; and Robert and wife Loyanne Kelley of Abilene. Grandchildren are David Matthews, Cindy Woodley, Lisa Graves, John Kelley, Loy Kelley, Walt Kelley, and Will Kelley, and 13 great-grandchildren. In lieu of flowers, the family requests donations be made to the Salvation Army, 633 N. Broadway Ave., Tyler, TX 75702 (www.salvationarmyusa.org) or Pets Fur People, 1823 CR 386, Tyler, TX 75708 (https://petsfurpeople.org).

Services for James &#8220;David&#8221; Kelley, 92, of Tyler will be held on Saturday, August 28, 2021 at 2:00pm at Stewart Family Funeral Home with Kevin Burdett officiating. Visitation will begin at 1:00pm before the service. Burial will... View Obituary & Service Information

The family of James "David" Kelley created this Life Tributes page to make it easy to share your memories.

Send flowers to the Kelley family.