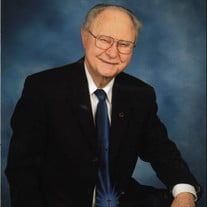 James Richard Lambert would like to announce his relocation from Atria Copeland in Tyler to his heavenly home on Sunday April 25, 2021. He is rejoicing in being with his Lord Jesus and his beloved wife of 59 years, Mary Ruth Hanes Lambert, his parents, Gifford and Tommie Lambert, and a sister, Jean Booth. Services for James Richard Lambert, 89, of Tyler will be held on Tuesday, May 4, 2021 at 10:00 a.m. at Stewart Family Funeral Home with Bro. Lon Graham officiating. Burial will follow at Tyler Memorial Park in Tyler under the direction of Stewart Family Funeral Home. He was born January 17, 1932 in Fort Worth to Gifford Lambert and Tommie Parks Lambert. His parents moved to Clarksville during his childhood and he graduated from high school in Clarksville. He joined the army in 1953 and served until August of 1955. He spent a large portion of that time in Japan and received a National Defense Service Medal and a Good Conduct Medal. He continued to serve as a Sergeant in the Army reserves from 1955 until he was honorably discharged in October of 1961. James was a member of The Woods Baptist Church where he faithfully served as a deacon for many years. He loved God, his family, and his church family. He graduated from Paris Junior College and East Texas State College in Commerce. He received a master’s degree from Stephen F. Austin and he attended continuing education classes at TJC and UT Tyler. He taught math at Hogg Junior High for many years and then taught at Robert E. Lee High School in Tyler. After retiring from being a school teacher, he began a second career driving a concrete truck for Transit Mix/Laforge/Trinity Industries. He is survived by his loving family including daughter, Belinda Dominey and husband Jim of Whitehouse; daughter, Kim Rush and husband Rickey of Longview; granddaughter, Shana Shires of Whitehouse; grandson, Travis Eyley and wife Lauri of Whitehouse; granddaughter, Moriah Luscombe and husband Justin of Longview; grandson, Simon Rush of San Antonio; grandson, Cody Lindley of Chicago, Illinois; great-grandchildren: Brandon Shires and Emily Shires of Whitehouse, Nathan Eyley of Whitehouse, Lily Luscombe and Hannah Luscombe of Longview. Pallbearers will be Rickey Rush, Justin Luscombe, Travis Eyley, and Cody Lindley. Honorary pallbearers will be Jim Dominey, Brandon Shires and Simon Rush. Visitation is scheduled from 5:00 – 7:00 p.m. on Monday, May 3, 2021 at Stewart Family Funeral Home, 7525 Old Jacksonville Highway in Tyler. If desired, memorials may be made to The Woods Baptist Church, 4502 University Dr., Tyler, TX 75707.

James Richard Lambert would like to announce his relocation from Atria Copeland in Tyler to his heavenly home on Sunday April 25, 2021. He is rejoicing in being with his Lord Jesus and his beloved wife of 59 years, Mary Ruth Hanes Lambert, his... View Obituary & Service Information

The family of James Richard Lambert created this Life Tributes page to make it easy to share your memories.

James Richard Lambert would like to announce his relocation from...

Send flowers to the Lambert family.