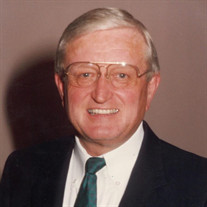 Services for James L. Milstead, 87, of Tyler will be held on Friday, February 4, 2022 at 11:00 a.m. at Stewart Family Funeral Home Chapel with Dr. David O. Dykes officiating. Visitation is scheduled one hour prior to service. A private burial will be held at Rose Hill Cemetery in Tyler under the direction of Stewart Family Funeral Home. Mr. James Lyle Milstead passed away Saturday, January 22, 2022 in Tyler after a brief illness. He was born February 19, 1934 in Tyler to Frank and Ruth Lyle Milstead. James graduated from Tyler High School in 1951 and Texas A&M University in 1955 with a BS degree in Industrial Engineering. After completing ROTC, he was commissioned in the US Army serving 2 years active duty and 6 years as a reservist attaining the rank of Captain. He was recalled back to the Army by President Kennedy during the Berlin crisis. He retired from Tyler Pipe Industries after 36 years of service as V.P. of Operations. James was also V.P. and GM of Texas Foundries – A division of Citation Corp. of Birmingham, AL for 4 years. He also worked with McLaughlin Merchants Partners as a partner doing mergers and acquisitions in the foundry and metals industry. James was an active member of Green Acres Baptist Church, serving as a Sunday school teacher for many years. He was firm in his faith in Christ and was a godly example to his friends and family. He also served as a board member of the American Foundry Assn., board member of the Assn. Former Students Texas A&M University, board member and chairman of Stewart Blood Bank, and board member of Memorial Hospital in Lufkin. He was until recently a volunteer for Meals on Wheels and deeply cared about all of “his people” on the route. Everyone that met James quickly learned of his devotion to Texas A&M University and his deep love for his alma mater. He was a life-long season ticket holder and never missed an opportunity to cheer on his Aggies regardless of the sport. He believed that his time at Texas A&M not only educated him but also molded his character and shaped his values. He loved his time on the golf course (narrating every shot) and enjoyed large family vacations in Florida, Colorado and Arizona. He also loved fellowshipping with his Aggie Lunch group each Friday. He was truly a generous man who was kind to everyone and never met a stranger. James was preceded in death by his parents, Frank and Ruth Milstead and his wife, Nona Cook Milstead. He is survived by his loving family including his brother Charles and his wife Jill; his children, Jameye Milstead Gardner (Ron), John K. Milstead (Pam), and Amy Milstead Pinto (Ben); grandchildren, Reed Gardner (Jessica), Sarah Gardner McWilliams (John), Seth Gardner, Beth Pinto Price (Conner), Emily Pinto Pratt (Jacob), Megan Milstead, and Michelle Milstead Dengler (Bryan); great-grandchildren, Ace Roberts, Penny Roberts, Ezra Gardner, Kennedy Gardner, Spencer Price and Cooper Price. He is also survived by three nephews and their families along with his “adopted sister-in-law”, Gayle Simpson. James was a devoted husband to Nona and selflessly cared for her during the last few years of her life. Our family is comforted that he is in heaven with his Lord and reunited with “Mimi”. “Granddaddy” will be remembered for his unconditional love of family and for being every grandchild’s biggest supporter and fan. Honorary pallbearers will be Charles Milstead Jr., Mark Milstead, Lyle Milstead, Dale Eppler, Dr. Tom Lyles, Paul Lilly, and his Aggie Lunch Group. In lieu of flowers memorials may be made to Meals on Wheels of East Texas - 3001 Robertson Rd, Tyler, TX 75701 or East Texas A&M Scholarship Fund – 5802 Cross Creek Circle, Tyler, Texas 75703-0506. “But we do not want you to be uninformed, brothers, about those who sleep, that you may not grieve as others do who have no hope. For since we believe that Jesus died and rose again, even so through Jesus, God will bring with him those who have fallen asleep.” 1 Thess. 4:13-14

Services for James L. Milstead, 87, of Tyler will be held on Friday, February 4, 2022 at 11:00 a.m. at Stewart Family Funeral Home Chapel with Dr. David O. Dykes officiating. Visitation is scheduled one hour prior to service. A private burial... View Obituary & Service Information

DUE TO INCREMENTAL WEATHER JAMES MILSTEAD'S VISITATION HAS BEEN CANCELLED FOR THURSDAY NIGHT AND MOVED TO FRIDAY, FEBRUARY 4 FROM 10:00 TO 11:00 AM.