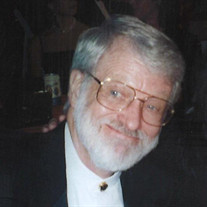 Dr. James Henry Pesnell peacefully passed away surrounded by family and friends on December 1, 2020. Services for Dr. Pesnell will be held Saturday, December 5, 2020 at Stewart Family Funeral Home with Dr. David O. Dykes officiating. Visitation will be at 1 pm with a memorial service following at 2 pm. Dr. Pesnell was born August 12, 1938 in Waco to Harry Pesnell and Ruth Blacklock Pesnell. After graduating from Baylor University, Jim attended medical school at UTMB in Galveston. His internship and residency were at Methodist Hospital in Dallas where he was chief intern and chief resident. Jim was a Board-Certified Doctor of Internal Medicine and proudly served his country during the Vietnam War as a physician in the US Army. Dr. Pesnell had a love for practicing medicine and practiced in Smith County for more than 20 years. His favorite things to do were to practice medicine and travel with his family. Jim’s hobbies were running, snow skiing and scuba diving. Dr. Pesnell also had a love for music and was a longtime supporter of the East Texas Symphony. He supported many local and national charities that included St. Jude Children’s Cancer Research Hospital. Dr. Pesnell was a lifetime member of the AMA and the AMA 50 Year Club, as well as a lifetime member of the TMA and the TMA 50 Year Club. He was a Fellow of Internal Medicine, a member of the American Board of Medical Specialists, a member of the American College of Physicians, a member of the Baylor University Heritage Club, a member of AOA Medical Honor Society and a member of the American Board of Internal Medicine. In addition to his many medical honors and associations, he was well respected by the local medical community. He is survived by his wife of 38 years, Linda Prince Pesnell. He is also survived by his children: Chris Pesnell, Diane Sims, Phillip Pesnell, David Pesnell and Donna Pesnell and their families that include 5 grandchildren and 1 great-grandchild. Additionally, he is survived by brothers, Tom Pesnell and John Pesnell; and sisters, June Sharon and Joyce Ruchuig; and numerous nieces and nephews. Dr. Pesnell was preceded in death by his parents, Harry and Ruth Pesnell; and sister, Winifred Ann Martin. The family would especially like to thank Gary Duffy, his longtime companion and friend for more than three years, and all of his other devoted caregivers, nurses, doctors, and support staff. In lieu of flowers, memorials may be made to: The Hospice of East Texas Foundation, 4111 University Blvd., Tyler, TX 75701 “The Lord bless you and keep you; the Lord make His face shine on you and be gracious to you; the Lord turn His face toward you and give you peace.” Numbers 6:24-26

The family of Dr. James H. Pesnell created this Life Tributes page to make it easy to share your memories.

Send flowers to the Pesnell family.