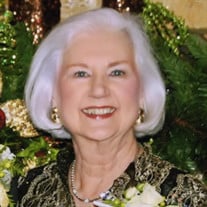 Jane Carroll McDaniel, 82, passed away on August 4, 2021 surrounded by her loving family. She was born on September 26, 1938, to her parents Louis Carroll and Maggie Moon Carroll. Jane was born and raised in Denison, Texas, where she attended Layne School and Denison High School, graduating in the class of 1956. During high school Jane was a majorette in the band, active in Y-Teens, and Student Council. She attended Texas Wesleyan College in Fort Worth where she received a degree in Home Economics in 1961. She was also a cheerleader, the May Fest Queen and one summer worked at the Estes Park YMCA Camp in Colorado. In 1976, she continued her education and obtained a master's degree from UT Tyler in Education. In June of 1961, Jane began working for Texas A&M Extension Service in Ellis County. While working and living in Waxahachie she met Jimmie McDaniel who also worked for the Texas A&M Extension Service. They were married at the First United Methodist Church in Waxahachie on December 21, 1962 and have been married for 58 years. In 1962, Jane began her teaching career, which lasted over 30 years. She taught in Avalon, Weatherford, Celeste, and in 1974 began with the Tyler Independent School District. In Tyler, she taught English at Dogan Middle School and in 1979 moved to Robert E. Lee High School, where she taught English and Reading Improvement until she retired in 1994. While at Lee, she was also the sponsor of the Robert E. Lee yearbook, "The Legend". Upon retirement, Jane spent her time attending the grandchildren’s many school and sporting events, tailgating at Texas A&M football games, gardening, and shopping every chance she had. Jane was a member of Marvin United Methodist Church and the Pairs and Parents Sunday School class. She was also a member of Beta Sigma Phi for over 50 years. Jane was a loving wife, mother, grandmother, sister, and friend to many. Jane was predeceased by her parents and grandparents. Survivors are her husband, Jimmie of Tyler; two sons, Jeffrey McDaniel and wife Lisa of Whitehouse, Jamie McDaniel and wife Shannon of Tyler; her adored grandchildren, Braden McDaniel and fiancé Amber Shobe of Kansas City, MO, Brennan McDaniel of Dallas, Ashlyn McDaniel and fiancé Kyle Regester of Little Elm, Austin McDaniel of Tyler, and sister Betty Carroll of Tyler. The family would like to give a special thanks to the staff and care givers at Hope Cancer Center, Meadow Lake Skilled Nursing Center, and Hospice of East Texas for the compassionate care given to her over the last several months of her life. Her life will be celebrated Friday morning, August 13th, in the sanctuary at Marvin United Methodist Church at 11:00 a.m. under the direction of Stewart Family Funeral Home. If desired memorials may be made to the Hospice of East Texas Foundation, 4111 University Blvd., Tyler, Texas 75701 or Marvin United Methodist Church, 300 W. Erwin, Tyler, Texas 75702.

Jane Carroll McDaniel, 82, passed away on August 4, 2021 surrounded by her loving family. She was born on September 26, 1938, to her parents Louis Carroll and Maggie Moon Carroll. Jane was born and raised in Denison, Texas, where she attended... View Obituary & Service Information

The family of Jane Carroll McDaniel created this Life Tributes page to make it easy to share your memories.

Send flowers to the McDaniel family.