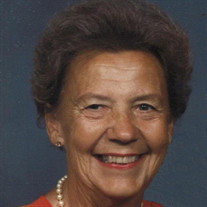 Janice Nichols Johnson was born June 30, 1925, in Bryan County, Oklahoma, the only daughter of Eva (Elrod) and Arthur Benton Nichols. She grew up in Kilgore, Texas, graduating from Kilgore High School in 1942. Janice then entered Kilgore Junior College where she was a member of the Rangerette second line and was frequently photographed as a local model; dancing became a lifelong joy. She continued her college career at Louisiana Tech, receiving a BA in speech and English. It was there she met and married her late husband Robert W. (Bob) Johnson, and they later made Tyler their home. Janice and Bob were blessed with five children– Steven Nichols, Rocquee Lynn, Ronnie Glynn, Don Robert and Julie Ann. The Johnsons were a golfing family and Janice was a long-time member of Willow Brook Country Club, serving in the Ladies Golf Association, as well as the East Texas Golf Association. She loved all sports, but especially those that the Oklahoma Sooners were playing. Janice was a member of Green Acres Baptist Church for more than 60 years and was an active member of the Joy Class. She was a member of the Quairo Literary Club and an avid reader. In fact, her memorization of scriptures, passages, poems and other literary excerpts continued into her 90’s. A devoted mother, Janice served as homeroom mother countless times, was President of the PTAs in all schools her children attended, and later served on the board of Children’s Village. She never tired of supporting her family in all pursuits. She was pre-deceased by her parents, her husband Bob in 1989, her three brothers – Tommy, Bobby and Jere Nichols – two sons, Steven Nichols Johnson and Ronnie Glynn Johnson; and daughter-in-law Nancy Johnson. She is survived by sons, Rocquee of Kingwood, Don Robert and wife Debbie of Tyler; daughter, Julie of Norman, Oklahoma; and six grandchildren – Ronnie Glynn Johnson, Jr. and wife Brandi of Houston, Cooper Johnson and wife Kathryn of Oklahoma City, Cadie and husband Nick Kelly of Tyler, Ashley and husband Robert Bryan of Humble, Christopher of Dallas, Jack and wife Jaclyn of Kingwood. She is also survived by six great-granddaughters – Jordan Johnson, Hailey Jayne Johnson, Hannah Kate Johnson, Ellee Medrano, Rhyan Johnson, Riley Johnson and Rose Bryan; as well as numerous nieces and nephews, all who loved her dearly. Her family thanks Brookdale Senior Living Center staff for their compassionate care over many months. Janice Johnson was a faithful friend, a loving wife and mother, a devoted daughter, a cherished sister, a beloved aunt, a proud grandmother and great-grandmother and a very special woman. She will be sorely missed. A graveside service will be held on Monday, December 28, 2020 at 10:30 a.m. in Rose Hill Cemetery in Tyler. Honorary pallbearers will be Glynn Johnson, Cooper Johnson, Chris Johnson, Jack Johnson, Nick Kelly and Robert Bryan. Donations to Green Acres Baptist Church, 1607 Troup, Hwy, Tyler, TX 75701 or Children’s Village, 3659 FM 724, Tyler, TX 75704 in Janice’s memory would have a made her very grateful, as both were close to her heart.

The family of Janice Nichols Johnson created this Life Tributes page to make it easy to share your memories.

Send flowers to the Johnson family.